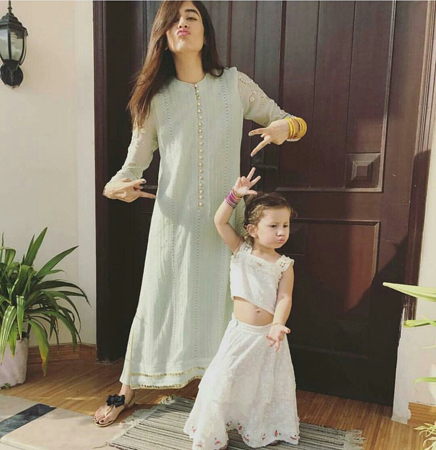 Actor Syra Yousuf performs her motherly duties on the shoot location, as she bonded with daughter Nooreh Shehroz on the sets of ‘Sinf-e-Aahan’.

A picture going viral across social media platforms sees the showbiz’s darling Syra Yousuf keeping her daughter Nooreh busy with a bunch of dolls and toys on the sets of her recent drama, ‘Sinf-e-Aahan’. The celebrity can be seen in her getup of ‘LC Arzoo Daniel’ in the click.

Apart from the adorable mother-daughter duo, the candid photo features popular actors Kubra Khan and Ramsha Khan – ‘LC Mahjabeen Mastaan’ and ‘LC Pariwesh Jamal’ – in the frame as the two indulged in some serious chatting session.

This adorable bond between Syra and Nooreh is being appreciated by the netizens, while many exemplified the former for fulfilling both on-screen as well as the off-screen roles with perfection.

After a hiatus of five long years, Syra returned to TV screens with ARY Digital’s ‘Sinf-e-Aahan’ as Arzoo Daniel.

The show follows the inspiring journey of six courageous women – played by Kubra Khan, Ramsha Khan, Yumna Zaidi, Sajal Aly, Syra Yousuf and Yehali Tashiya Kalidasa – who aimed to become a part of the Pakistan Army, and their struggles along the way.

For those unversed, Syra parted ways from former husband Shehroz Sabzwari in 2020, after eight long years of togetherness. The couple has a daughter Nooreh Shehroz born in 2014, whom they have decided to co-parent.