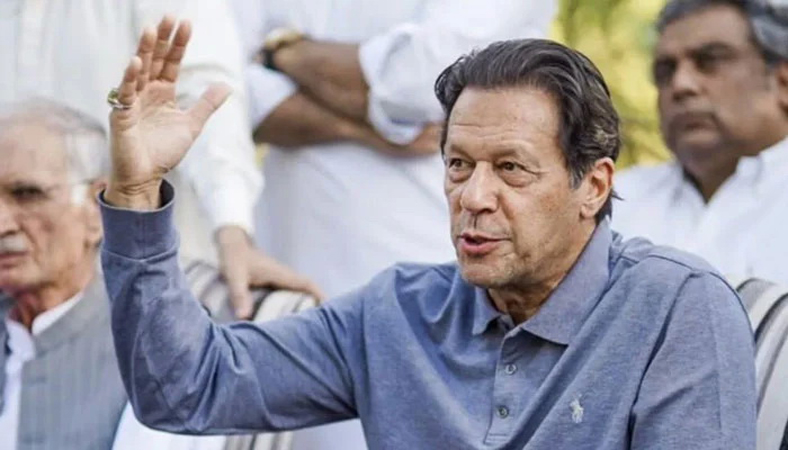 Former prime minister and PTI Chairman Imran Khan Saturday claimed he was right all along and the National Security Committee’s (NSC) latest statement proves that there was a US conspiracy to remove him from office.

Addressing his first press conference after his removal from office, Imran Khan said the NSC meeting – with Prime Minister Shehbaz Sharif in the chair – endorsed that the cable was genuine and that Pakistan’s ex-ambassador to the US held a meeting with American official Donald Lu, where the latter used undiplomatic language. “I will go a step forward and say that he (Donald Lu) was arrogant […] the Joe Biden administration official told our ambassador that Imran Khan will have to be removed through a no-confidence motion,” the PTI chairman said, adding that the meeting took place before the no-trust motion was filed.

“Supreme Court should hold open hearing on threat letter… we will not accept any in-camera hearing,” he remarked, and also claimed that Prime Minister Shehbaz Sharif and PPP leader Asif Ali Zardari colluded with “foreign conspirators” to remove him from power. “No prime minister would be able to hold out against foreign conspiracies in future if no investigation was carried out [into alleged threat letter],” he said while urging the state institutions to take a stand against alleged foreign plot to protect country’s sovereignty.

Commenting on the diplomatic cipher, Imran said the language used by the US diplomat against his government was ‘unprecedented’ and ‘threatening’. He also lashed out at the opponents for terming the telegram as a routine matter, calling them “shameless”.

This has also been confirmed – after the new NSC statement – that the political heads and some of our allies were unaware that they were part of a foreign conspiracy, the PTI chairman said. Khan said although some people here were unaware of the “conspiracy”, the person sitting in London, PML-N supremo Nawaz Sharif, his brother Prime Minister Shehbaz Sharif, and PPP Co-chairman Asif Ali Zardari were all part of it.

“They were all hand-in-hand in this conspiracy,” he said.

Lashing out at the incumbent government, he said PM Shehbaz and his sons had to answer to the Federal Investigation Agency (FIA) for Rs40 billion that you accumulated through corruption. “…but now he has changed the (DG FIA),” Khan said, implying that the PM was aiming to get an easy way out. He claimed that 70% of the federal cabinet was on the Exit Control List (ECL).

Imran Khan said that he has asked his party to begin preparations for marching to Islamabad. He said he would announce the date for the march later but directed party leaders, including those at village level, to prepare for the march for “true freedom”.

A huge sea of people would go towards the capital, he said, adding that he had never seen such political awareness among the people. “People have begun to understand the joke that happened with them and the kind of people placed on us (as rulers),” he said, claiming that there was an unprecedented number of “criminals” and those who were out on bail in the newly formed federal cabinet. He also said the party would hold prayers on the 27th of Ramazan for the march’s success.