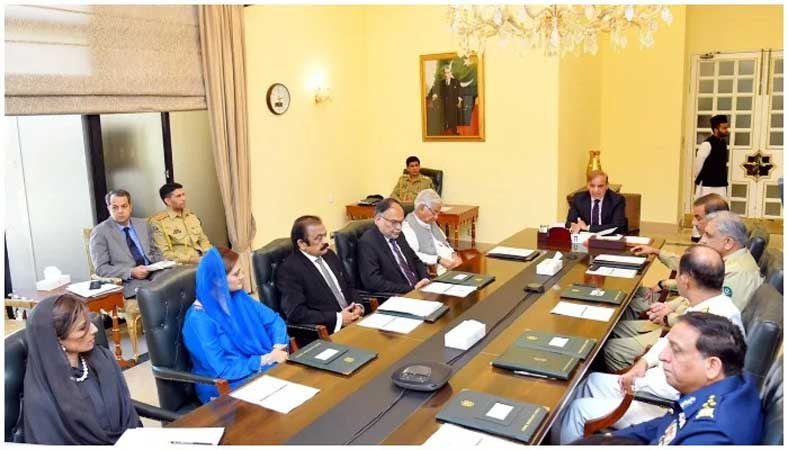 The National Security Committee (NSC) Friday said there was no foreign conspiracy to topple the Imran Khan-led government, according to a statement released after a meeting of the body.

“The NSC discussed the telegram received from the Pakistan embassy in Washington. Pakistan’s former ambassador to the US briefed the committee on the context and content of his telegram,” it stated.

The meeting of the NSC, which is the highest forum for coordination on security issues, was chaired by Prime Minister Shehbaz Sharif.

According to the statement, the NSC examined the “contents of the communication” shared by the ambassador and “reaffirmed the decisions of the last NSC meeting”.

“The NSC was again informed by the premier security agencies that they have found no evidence of any conspiracy,” the statement said, adding that the meeting concluded that “there has been no foreign conspiracy”.

The statement by the NSC comes as former prime minister and PTI Chairman Imran Khan has launched a campaign, claiming that his government was ousted by a “foreign conspiracy”. To back his claim, Imran has continuously referred to a cable sent by Pakistan’s former ambassador to the US, Asad Majeed, which he said contains evidence of the conspiracy to topple his government.

This is the second time in as many months that the NSC has held a meeting to review the contents of the cable sent by Majeed.

In March, the NSC had decided to issue a “strong demarche” to a country, that it did not name, over what it said was “blatant interference in the internal affairs of Pakistan”. While the forum had stopped short of calling the interference a conspiracy in its last meeting, which was chaired by then-prime minister Imran Khan and included the same services chief who attended today’s meeting, it had explicitly not denied that a conspiracy was hatched.

Last month’s NSC meeting had also termed the interference “unacceptable under any circumstances”.

“As far as military response about the NSC meeting is considered, that stance, in that meeting was fully given, and then a statement was issued … which clearly says what was concluded in that meeting.

“The words used are in front of you … as I said … the words used are clear. Is there any word such as conspiracy used in it? I think not,” he had said in response to a question asked by a journalist.

The DG ISPR had also said that issuance of demarches was not specific to the hatching of conspiracies but could also be given for other reasons. “In this case, it was given for undiplomatic language and … interference,” he had said.