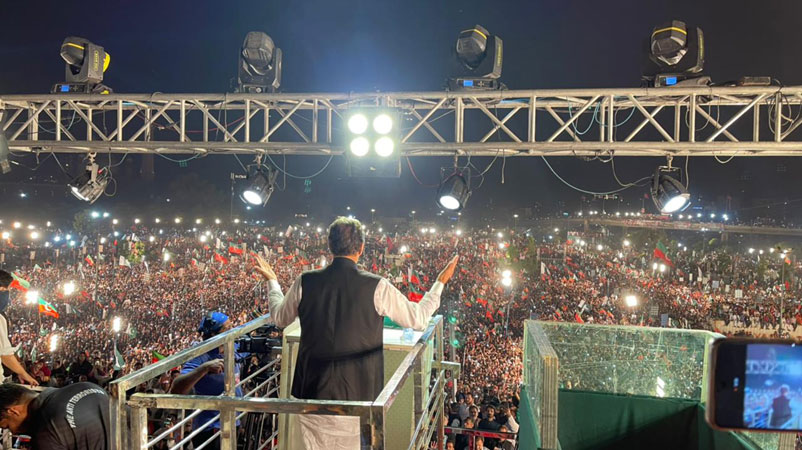 PTI Chairman Imran Khan Thursday asked people to gear up to start a campaign for ‘actual independence’ and wait for his call to Islamabad, as the ousted premier stressed he would not accept the “imported government” at any cost.

“The actual party has just begun, our campaign will intensify […] wait for my call. I don’t want anything else except early elections,” the ex-prime minister told the Lahore rally, calling on the people who had committed a mistake to hold early polls.

Towards the end of his speech that lasted more than an hour, Khan said that if his rivals were wondering what would happen after the Lahore rally, “my message to them is that the real party has only just started.” “I’m not giving a call just to the PTI but all of Pakistan. You all have to prepare in the streets, cities and villages. You have to wait for my call when I call you all to Islamabad. I want to make it clear that I don’t want a confrontation. We do not want to hurt our country but we won’t accept this imported government in any way. This movement will gain momentum.” He put forward his demand for fresh elections “as soon as possible.”

Khan called on the supporters of PML-N and PPP as well to support the PTI as they were unaware of the foreign conspiracy that had been hatched against his government. “But I want to make it clear, I do not want any conflict. This is my country and I have nowhere else to go […] I will live and die in Pakistan,” the PTI chairman said.

Khan reiterated that if Pakistan did not have a strong army, then the country would have been split into three parts.

“Had our army personnel not sacrificed their lives the way they did, our situation would have been similar to the one in Syria and Iraq.”

Khan accused Chief Election Commissioner (CEC) Sikander Sultan Raja of being biased against the PTI, claiming that his leanings were so obvious that “he should be given a PML-N office position.”

“I challenge that if you dare then listen to our cases collectively so all of the nation knows who really collected money through proper channels and who does it through illicit means.” 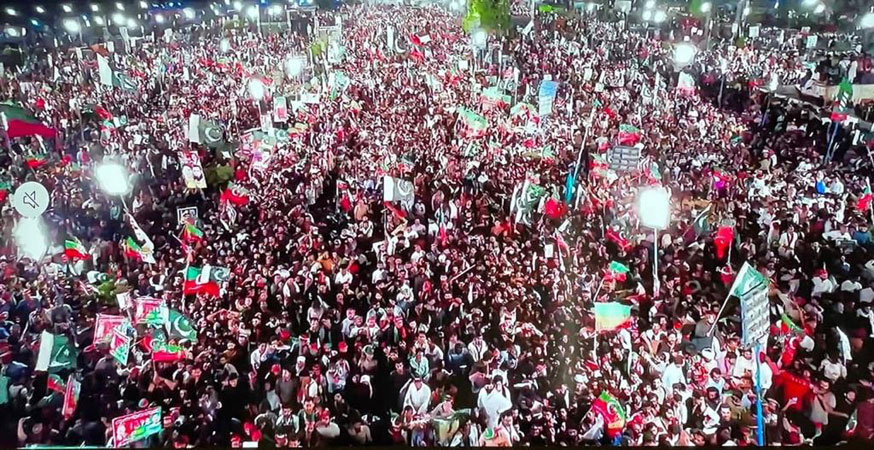 The PTI chairman criticised Prime Minister Shehbaz Sharif and his son Hamza Shehbaz for the corruption cases against them and urged the judiciary to protect officers in charge of pursuing corruption cases.

“These people – where they’re sitting – tell me, which govt officer will take action against them when they know they will be subjected to revenge. I ask the courts, ‘is it not your job to protect these officers?'”

“I tried in my 3.5 years of government that cases against them progressed … but nothing happened. The NAB wasn’t under me, the courts were free … what could we have done apart from their FIA cases? And those who had power in their hands did not consider corruption to be bad. It wasn’t anything big for them.”

He rejected the prime minister’s offer of creating a commission to probe the cablegate scandal, saying: “You think that we will accept your commission? We will only accept one commission that is in the Supreme Court. Let’s have open hearings so everyone knows what big conspiracy was done against Pakistan.” Berating the incumbent government for ousting him from power, the ex-prime minister said they bought the conscience of lawmakers and “polished the boots of foreign powers” to come into power.Going into the details of why a “foreign conspiracy” was hatched against him, Khan said that the day he came into power, it was his goal to give an independent foreign policy to Pakistan. “An independent foreign policy means that all the decisions will be made in the interest of the people. I cannot sacrifice my countrymen for a foreign power,” Khan said. 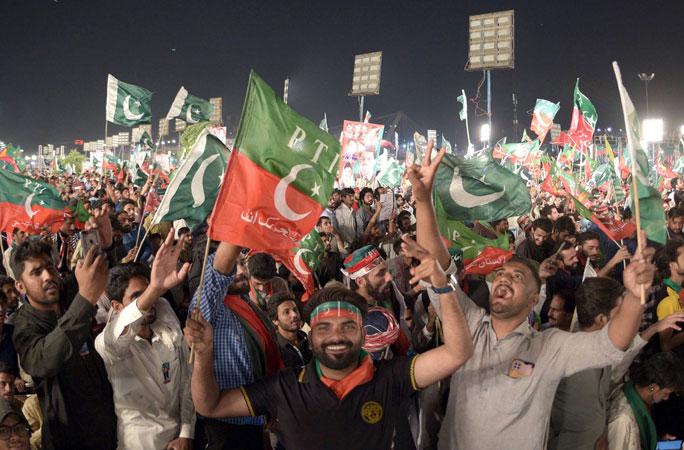 The PTI chairman alleged that the incumbent rulers were always obedient when foreign powers gave them directives but claimed he did not follow suit, so the foreign powers “did not like it”. Khan said that he also resolved to raise the issue of Islamophobia at every international forum – the United Nations, Organisation of Islamic Cooperation, and others – as a strong 1.5 billion Muslim populace was troubled in foreign countries. “So the foreigners did not like it either,” he said.

The third thing that the foreign powers did not like was his attitude of “not taking dictation from anyone”. The ousted premier claimed that a foreign power questioned his visit to Russia. Defending his Russia visit, the PTI chairman said Moscow was ready to provide Pakistan with petroleum products 30% cheaper than international prices. “We could sell petrol and Fazlur Rehman (diesel) at 30% cheaper rates,” the ex-premier said, taking a jibe at the JUI-F chief, who is now part of the ruling coalition.

Khan defended his conduct in the Toshakhana scandal, saying that everything he bought back was on record. He said the money gained from the sale of gifts he retained were used to mend roads leading up to his residence, which are also used by the general public.

“During their time, when presents came, they could buy them back by giving just 15pc. We came and increased the minimum price to 50pc,” he said.

“The wall I had to erect … I did not take money from the government, and these people are today doing this propaganda. I’m challenging that never in Pakistan’s history a prime minister has ever spent as less on himself as I did.” 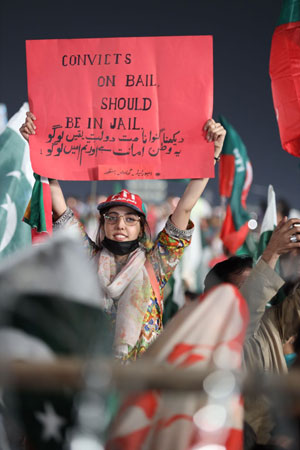 Khan said the foreign powers did not like him boosting trade with China as well. “Since they did not like all of these things, a conspiracy was planned. But no conspiracy can be successful without the support of Mir Jafars and Mir Sadiqs,” the ousted premier said.

Khan urged his audience to never vote his this political rivals, saying that “If you allow them to win in any constituency, you would commit treason with this country.”

Qureshi, during his speech, said that another “conspiracy” was in the works against the party in the form of the foreign funding case through which he claimed the plan is to get the party banned.

The rally was also attended by PTI supporters from the music industry such as Salman Ahmed, Bilal Khan and Abrarul Haq, with the latter two also singing songs.

Earlier, party leaders Shireen Mazari and Faisal Javed accused the government of blocking routes leading to Minar-i-Pakistan in an attempt to impede the rally.

“First blocking all the roads leading to Minar-i-Pakistan, and now shutting off internet service!” Mazari tweeted. ” … imported govt & desperate crime minister (Prime Minister Shehbaz Sharif) think they can stop the nation from rising against this criminal mafia of an imported govt!”

PTI Senator Faisal Javed, while addressing the rally, said reports were being received that routes were being blocked to stop people from reaching the rally site. He called on the administration to unblock routes and warned them not to obstruct the public.

Internet services have also been reportedly disrupted in the vicinity of the rally site.