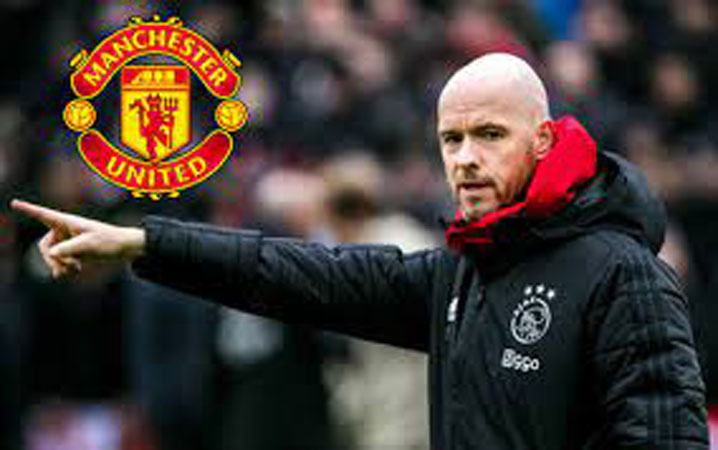 MANCHESTER: Erik ten Hag will leave Ajax to become Manchester United manager next season, the English giants confirmed on Thursday. The 52-year-old, who has signed a three-year contract, faces a huge task to revive the Red Devils fortunes after a fifth consecutive trophyless season. The Dutchman becomes the fifth permanent manager at Old Trafford since Alex Ferguson’s retirement in 2013 sent the 20-time English champions into decline. Ten Hag is on course to win his third league title with Ajax and took the four-time European champions to the semi-finals of the Champions League in 2019 for the first time in 22 years. “It is a great honour to be appointed manager of Manchester United and I am hugely excited by the challenge ahead,” said Ten Hag. “I know the history of this great club and the passion of the fans, and I am absolutely determined to develop a team capable of delivering the success they deserve.

“It will be difficult to leave Ajax after these incredible years, and I can assure our fans of my complete commitment and focus on bringing this season to a successful conclusion before I move to Manchester United.” United sit sixth in the Premier League, 23 points behind leaders Manchester City, and are unlikely to qualify for next season’s Champions League.

The club have been looking for a permanent manager since Ole Gunnar Solskjaer was sacked in October. Ralf Rangnick was appointed interim boss for the remainder of the season, but the German has been unable to inspire any improvement in United’s performance.

Rangnick has been fiercely critical of the standard of the United squad in recent weeks, claiming after Tuesday’s 4-0 defeat by Liverpool that United are “six years” behind their rivals.

Squad overhaul: An overhaul of the squad is expected in the coming months with Paul Pogba, Edinson Cavani, Jesse Lingard and Juan Mata all out of contract and Nemanja Matic having already announced his decision to leave at the end of the season. A summer of long-needed change will put Ten Hag’s ability to work constructively with the club’s new CEO Richard Arnold, technical director Darren Fletcher and football director John Murtough immediately to the test. “During the past four years at Ajax, Erik has proved himself to be one of the most exciting and successful coaches in Europe, renowned for his team’s attractive, attacking football and commitment to youth,” said Murtough. “In our conversations with Erik leading up to this appointment, we were deeply impressed with his long-term vision for returning Manchester United to the level we want to be competing at, and his drive and determination to achieve that. ”

The future of Cristiano Ronaldo is also uncertain. Ronaldo has scored 21 goals in his first season back at Old Trafford, where he enjoyed a glorious first spell between 2003 and 2009. The 37-year-old still has one year left on his contract, but may not be keen to miss out on Champions League football in one his few remaining seasons at the top of the game. Ajax lead PSV Eindhoven by four points in the Dutch title race with five games to go.

“We would have liked to have kept Erik longer at Ajax,” said the Dutch champions’ chief executive Edwin van der Sar, who himself played for United for six years. “He is going to make the step to one of the biggest clubs in the world, which plays in a fantastic competition. “In any case, we owe a lot of thanks to Erik for what he has achieved with Ajax so far, but we are not done yet.”

Former United captain Gary Neville believes the club were compelled to move for Ten Hag after another leading candidate, Mauricio Pochettino, endured a difficult spell at Paris Saint-Germain. “I think Pochettino has been the outstanding choice for a number of years. But losing in the Champions League this season and not winning the French league last season has cost Mauricio,” Neville said. “The mood music is absolutely key. Erik ten Hag is the man of the moment, the overwhelming choice I think of the fans as well, and the club has determined he is the right man to take the club forward.”