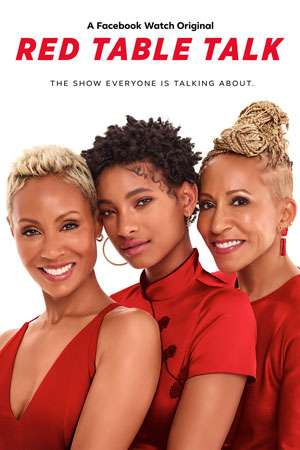 The Red Table returns! On April 19, Facebook Watch announced that Red Table Talk will return for season five on April 20. The Emmy Award-winning series-hosted by the multigenerational trio of Jada Pinkett Smith, her daughter Willow Smith, and her mother, Adrienne Banfield Norris AKA “Gammy”-is filmed at the Smith family home, where the three women host honest and intimate conversations.

Season five begins with an episode guest-starring Janelle Monáe, “Janelle Monáe’s Hidden Struggles.” The Grammy-nominated singer-songwriter will share an “inspiring message for anyone who’s ever felt like they didn’t fit in or can’t be themselves,” according to the episode description. Janelle will explain “how she overcame her fears of abandonment and healed from the traumatizing effects of her father’s drug addiction.”

“I am super honoured to be here,” Janelle says in the trailer. “My dad had gotten on crack cocaine, I was dealing with real rejection, abandonment issues.”

The upcoming episode will be the show’s first following the events of this year’s Oscars, at which Jada’s husband, Will Smith, famously slapped Chris Rock after the comedian made a joke about Jada’s hair.