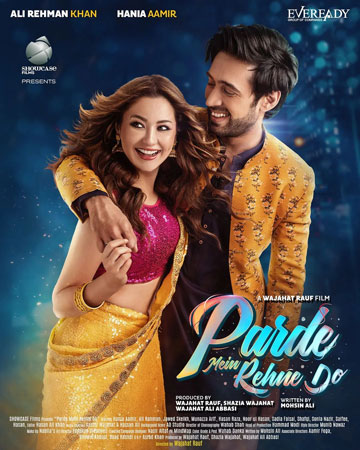 Actress Hania Aamir, all set to grace the big screen in Wajahat Rauf’s Parde Mein Rehne Do this Eidul Fitr, recently sat down for an interview with a local publication to talk about the themes of her latest venture, as well as the expectations she has from it.

Her latest film, a comedy drama in which she will be seen starring opposite Ali Rehman Khan, will focus on the struggles of a couple dealing with infertility.

The actor’s previous cinematic projects include Na Maloom Afraad 2, Janaan and Load Wedding. Speaking about her return to the big screen, Hania shared, “I’m looking forward to it. I’m excited that people will see me on screen after so long. They’re all happy feelings.”

When asked about her thoughts on the “social comedy”, Hania explained that she is not one to steer clear of a taboo topic simply because of the shame attached to it. She shared, “I have been vocal about a lot of social issues. So, I don’t shy away from talking about anything that is taboo at the end of the day. This film is like that. I absolutely believe in what it says and what it’s talking about. So yeah, it’s been a great experience.”

On how topics that are not openly talked about are not always inherently “wrong”, the actor added, “Look, there are many things that are taboo for the wrong reasons. If something is taboo, that doesn’t mean it’s wrong. Talking about something like this isn’t wrong and neither should there be any shame attached to it, because in Pakistan and other countries, infertility has shame attached to it.”

She went on, addressing the need for films other than basic love stories, “That’s why we want to talk about this topic. Nobody should be ashamed of this. Sure, we see films and TV series that only have a love story and songs. There’s nothing wrong with them. We enjoy those films as well. But, content like this should also exist, the kind that makes you feel like you learned something worthwhile.”

When asked what she believes the film is hoping to achieve, Hania responded, “Our aim is to start a conversation. We aren’t expecting people’s perceptions and ideas to change tomorrow. This isn’t what we’re saying. You can’t achieve something like that overnight. We want people to talk about it. Change comes afterwards.”

While Hania has a few acting credits to her name, Parde Mein Rehne Do marks her second film as a lead actor, the first being Janaan. On playing main characters, Hania shared, “For me, craft is the most important. Acting is everything. It’s been a great journey. I’ve gotten to learn a lot and I’ve met some great people, so it’s been pretty pleasant.”

Ali, who plays her husband in the upcoming film, was seen in the role of her cousin in Janaan. Reflecting on their acting journey together, Hania explained, “There isn’t much of a difference because we’re still the same people. He’s one of those people who are still the same as the day I met them. We’re both very simple people and we enjoy each other’s company. Ever since Janaan, we’ve had fun and joked around. It’s been a good experience. We’re also friends, so between that film and this one, we’ve always been friends.”

This Eid will see five local films releasing in cinemas, including Saba Qamar’s Ghabrana Nahi Hai. When questioned about the competition, Hania shared, “We’ve seen the film and we really like it. We’re hoping everyone else will too. I would want people to not be too critical because we need their support. We want them to enjoy films and give us good feedback and support so that we can continue making them.”

The Sang e Mah actor, when asked about her limited presence on Twitter, despite her tendency to go viral on the site, responded, “When I feel like there is something important that needs to be said, I use Twitter. It’s not my everyday update… I treat Twitter like that also, for when I want to find out what people are saying about something. I don’t think it needs my daily life updates.”

On social media bullying and criticism, she shared, “It does affect me, but I bounce back. Thankfully, my family and friends are very supportive and they’re very nice, so they remind me who I am and what my core is. So, yeah. They remind me and I feel better. But saying that it doesn’t affect me at all and that I have very thick skin, that’s not the case. I bounce back because I process things faster.”