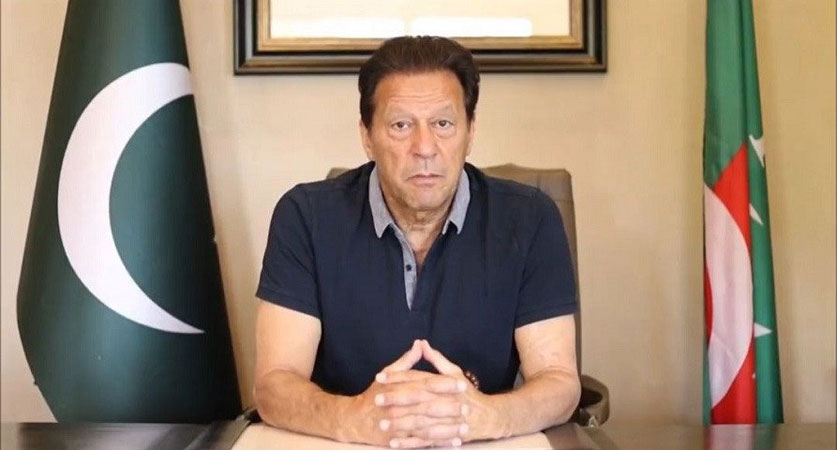 Former prime minister and Pakistan Tehreek-e-Insaf (PTI) Chairman Imran Khan has said that the entire institutions were not corrupt but some elements in them indulge in ‘bad practices’.

“If one person makes a mistake, this does not mean that the whole institution is at fault,” he said while addressing the party workers and supporters live on social media on Wednesday night, a private TV channel reported. Replying to a question regarding the role of state institutions in the upcoming elections, the deposed premier said “there are also humans [in institutions]… if one or two individuals do something wrong, the entire institution is not responsible for their act,” he added. Talking about the chief election commissioner, he said that all his judgements were “anti-PTI”. “The day [foreign funding] cases of all three parties are heard simultaneously, it will be clear that only PTI has a proper system of funding,” he added.

Imran Khan said that if former prime minister Nawaz Sharif comes back and gets another ‘NRO’, he will not accept it and bring people out on streets. “It will discredit judicial system as no one would believe in it… everyone will say the wealthy can get away with anything in Pakistan,” he added. He said that in third world countries, they only catch small thieves and not the big ones but in the first world, there is no such thing. “You cannot imagine prime ministers making factories there… rule of law is the biggest issue in Pakistan,” he added.

Imran Khan said that there are big mafias in Pakistan and his government was bringing them under the rule of law. To a question about dissenting PTI members, Imran Khan said that they thought when PTI would come into power, the government will make their businesses grow [in a wrongful way] but we did not. “That’s why we faced issues because we stopped them. If sugar prices suddenly increased by Rs26 per kilo then we tried to stop it … these people have exposed themselves,” he added. Imran Khan said that if the country’s youth accepts the “foreign conspiracy” then in future the whole generation would be seeking visa of rich countries. “If corrupt people come into power like this then there is no future,” he added.

To a question about memes on social media, the former prime minister said that he doesn’t watch television anymore nor does he get time to read newspaper but he sees things on social media these days. Imran Khan urged his followers not to say anything bad about the armed forces of Pakistan. “If there was no army, there will be no Pakistan… Pakistan needed army more than Imran Khan,” he added. He said that the enemies of Pakistan are attacking the army and during their tenures Nawaz Sharif and Asif Ali Zardari tried to undermine the army. “When Nawaz was abroad, he attacked the COAS and the army and everyone knows this,” he added. He further said that if there was no army, there would be three pieces of Pakistan by now.

In the next elections, he said he himself will lead the party’s campaign in interior Sindh. “Independence is more needed in the province than the rest of Pakistan. As long as the rule of law is not applied to the powerful, Pakistan will never prosper.”

He said that Maryam Nawaz, Hamza Shehbaz and Bilawal Bhutto have no credentials as they cannot connect with people. These are privileged people and their parties are shrinking… PTI is the only federal party of Pakistan… they cannot compete with us [in the upcoming election], he added. “Political dynasties are the negation of democracy. Their (PDM) children; be it Maryam, Hamza or Bilawal have never worked a day in their lives. They are accustomed to living like royalty.”

To a question about security threats to PTI’s Lahore rally, Imran Khan said that he will definitely come to the rally. “It is a special place because Pakistan resolution was tabled there … Indian Muslims had decided that they wanted separate land … we’re also launching our campaign there … I believe we will have record number of people there.”