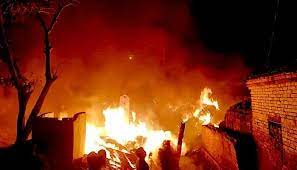 HYDERABAD: As many as 9 people including innocent children were killed and several houses were reduced to ashes in a fire that broke out in different villages of Mehar taluka in Dadu district.

According to details, nine people including kids were burnt and scores of others received burn injuries when a fire engulfed over 70 houses near Faridabad town of the district.

The fire broke out in different villages after spreading from the stoves of the villagers due to gusty winds on Monday night.

Hundreds of livestock animals were also perished and burnt alive due to fire incident and villagers had lost all their belongings, local volunteers said while talking to media.

The tragic incident occurred in village Faiz Muhammad Chandio near Faridabad in which 9 people had lost their lives who were identified as Mor, Rasheed, Alam, Nargis, Zaman, Akram, Abdul Rasool, Hussain, and Savera.

The police shifted the bodies and injured to a nearby hospital for medico-legal formalities.

As a reaction the villagers later held a protest against the administration, urging the Sindh chief minister to take notice of the indifferent attitude. They said the deputy commissioner of Dadu and other officials had arrived after 12 hours. The elders of the villages demanded the authorities completely rehabilitate all the damaged houses and pay compensation immediately.

Taking notice of the incident, PPP Chairman Bilawal Bhutto-Zardari talked to the Sindh CM to ensure relief work for victims.

Prime Minister Shehbaz Sharif said the federal government will too take measures to provide relief to the families of the victims.