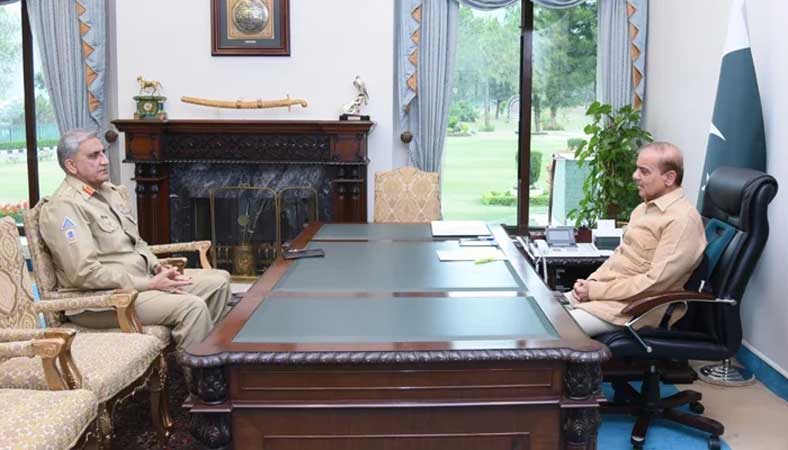 Prime Minister Shehbaz Sharif Tuesday, in a major relief package, announced the reduction of flour price from Rs 550 to Rs 400 per 10-kilogram bag in the Punjab province to provide relief to the people during the Holy Month of Ramazan.

The prime minister also remarkably reduced the sugar price from Rs 75 to Rs 70 per kg to be available at the Ramazan Bazaars and Utility Stores till Eid-ul-Fitr. He also urged the other provinces to try fixing the said prices for the public relief.

Prime Minister Shehbaz asked the Punjab government to support Balochistan and Azad Jammu and Kashmir governments to help them fix the said prices of the two commodities.

Moreover, he also announced that the Federal Government would make additional payments to the Balochistan Government in this regard, as required.

Separately, Chief of Army Staff General Qamar Javed Bajwa on Tuesday met Prime Minister Shehbaz Sharif at the latter’s official residence in Islamabad, a statement from the PM House said. It was the maiden visit of the army chief to Shehbaz after the latter’s election as the prime minister.

According to a statement from the Prime Minister’s Office, professional matters pertaining to national security were discussed during the meeting.

Meanwhile, Prime Minister Shehbaz Sharif called upon the international community to take notice of the recent incidents of Islamophobia that took place in Sweden and the Netherlands.

“The people of Pakistan and Muslims around the world are deeply hurt by the recent incidents of Islamophobia in Sweden and the Netherlands,” he said in a tweet.

PM Shehbaz Sharif said the international community must condemn these incidents and stressed steps to check such “abhorrent behaviour”. He also emphasized standing united against Islamophobia.

Earlier, the Foreign Office in a statement said that “these mindless provocative Islamophobic incidents served no purpose other than hurting the sensitivities of over 1.5 billion Muslims living all over the world”.

“Such actions are not covered under legitimate expressions of the right to freedom of expression or opinion, which carry responsibilities under international human rights law, such as the obligation not to carry out hate speech and incite people to violence,” the FO said. Prime Minister Shehbaz Sharif Tuesday emphasised his government’s commitment to further advance and explore economic relations with the United Arab Emirates (UAE).

The premier expressed his views during a meeting with UAE Ambassador Hamad Obaid Ibrahim Salem Al-Zaabi, who called on the PM to congratulate him on assuming office and reaffirmed UAE’s desire to further strengthen bilateral relations with Pakistan.

During the meeting, PM Shehbaz stressed upon enhancing trade, investments, energy, infrastructure, food security and employment generation between the two countries. He affirmed that Pakistan and the UAE had always enjoyed special relations, which were firmly rooted in shared history, common faith and geographical proximity.

The premier added that close diplomatic ties had also helped strengthen the relations between the UAE and Pakistan. Shehbaz also acknowledged the important role of the Pakistani expatriate community in UAE’s development, which serves as a bridge between the two countries.

PM Shehbaz conveyed his warm greetings to the UAE leadership and expressed his commitment to closely engage with them on further deepening and broadening the vital partnership. He expressed deep appreciation for the vision of the UAE’s leadership with regard to the inspirational transformation of the country in the span of 50 years.

Pakistan and the UAE enjoy close fraternal ties marked by decades of close collaboration. High-level interactions serve as continuous momentum to the growth of bilateral cooperation.