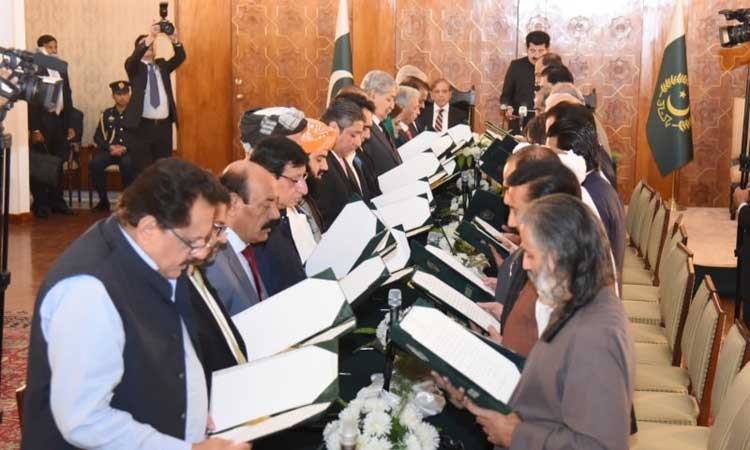 After much delay leading to gossiping and speculations, the 37-member federal cabinet was Tuesday sworn in in the first phase at an oath-taking ceremony held at the President House.

Senate Chairman Sadiq Sanjrani administered the oath to the members of the federal cabinet instead of President Arif Alvi as he excused himself to perform his constitutional duty.

The federal cabinet has 31 federal ministers, three ministers of state and three advisers.

In a tweet, PM Shehbaz said the federal cabinet was formed after “thorough consultations” with PML-N supremo Nawaz Sharif and the coalition allies. “It is my fervent hope that federal ministers, ministers of state and advisers will provide leadership, and resolve the problems of the people. Work, work and only work is our motto,” he said. PML-N’s Marriyum Aurangzeb and Azam Nazir Tarar have been appointed information and law minister, respectively. Ahsan Iqbal, also from the PML-N, has been appointed as planning and development minister.

The ceremony was scheduled to be held on Monday, but it transpired that President Arif Alvi had refused to administer the oath to the lawmakers, compelling the government to postpone the ceremony to Tuesday. On the other hand, some government allies were said to be dissatisfied over the demands they had extended to the government regarding distribution of ministries and other lucrative positions.

It was learnt that the Balochistan National Party (BNP) and Jamiat Ulema-i-Islam-Fazl (JUI-F) would not join the cabinet on Tuesday, as the former had accused the government of not preventing violent incidents in the province, such as the recent firing on protesters in Chagai.

The opposition alliance had led to the ouster of Prime Minister Imran Khan from his office through a majority no-confidence vote in the parliament on April 10. On oath, the cabinet made its solemn pledge “to bear true faith and allegiance to Pakistan, discharge its duties honestly to the best of ability and faithfully in accordance with the Constitution of the Islamic Republic of Pakistan and the law”.

“I will strive to preserve the Islamic Ideology which is the basis for the creation of Pakistan. That I will not allow my personal interest to influence my official conduct or my official decisions,” said the new ministers in chorus-reading of the text of the official oath. Despite reports of PPP Chairman Bilawal Bhutto Zardari and former prime minister Shahid Khaqan Abbasi to be given the portfolio of foreign ministry and petroleum ministry respectively, the two politicians are not part of the cabinet so far.

Earlier, there was uncertainty among the parties of the ruling alliance on becoming a part of the federal cabinet as PPP Co-chairman Asif Zardari had said his party would not take ministries.