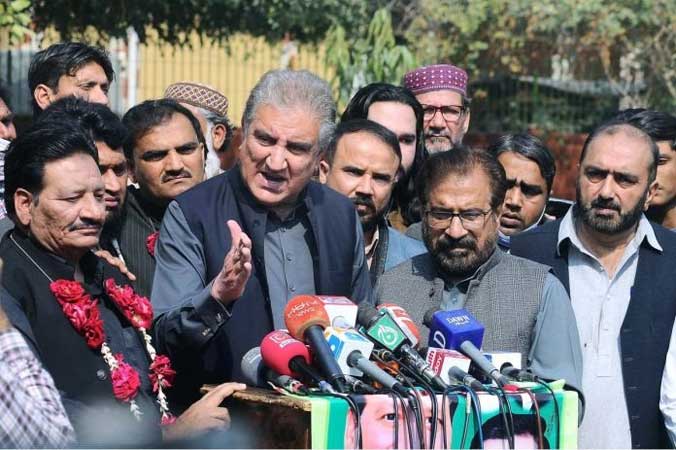 As the election watchdog steps up the proceedings of the foreign funding case against the Pakistan Tehreek-e-Insaf (PTI), Shah Mehmood Qureshi on Tuesday urged the Election Commission of Pakistan (ECP) to summon other political parties in their respective cases as well, a private TV channel reported.

Speaking to media outside the ECP office in Islamabad, Qureshi said they were not fretting but other parties should also be summoned to face relevant cases. He added the claim of foreign funding against the PTI did not hold water and all funds were legal. He further said the scrutiny committee in charge of the case against the party extended its mandate. “Our record is clean,” he said, adding that overseas Pakistanis also supported the PTI.

Earlier in the day, PTI lawyer Anwar Mansoor appeared before the ECP in the foreign funding case. During the hearing, Mansoor argued that the ECP board was incomplete as two of its members could not be appointed as of yet. He said as per the Election Act 2017, the commission’s strength must be complete.

Speaking about the Islamabad High Court (IHC) seeking a conclusion of the foreign funding case within 30 days, the PTI counsel said the observation given by the high court was unfortunate as the order also included the points on which arguments had not been given.

Mansoor further said the Political Parties Order allowed funding from foreign companies. He said the case pertained to the illicit funding that could take place even from inside the country.

The case against the PTI pertained to the period between 2009 and 2013, he said, adding that the TORs submitted to the scrutiny committee only mentioned foreign funding and the committee could only have probed the foreign funding in case of such allegations.

Subsequently, the hearing was adjourned till next week after his arguments.

The foreign funding case is pending since November 14, 2014. The case was filed by Akbar S Babar who had alleged serious financial irregularities in the PTI’s funding from Pakistan and abroad.

On January 4 this year, an ECP scrutiny committee report had unearthed that the PTI had concealed several accounts and around Rs310 million between 2008 and 2013 from the electoral body.

It had further disclosed that the party had received $44,000 from 88 foreign donors during this period. The undisclosed accounts have been mentioned in a report by the State Bank of Pakistan. The scrutiny committee had also included its analysis of the bank accounts in the report.