Six killed in blasts at Shia school in Afghan capital 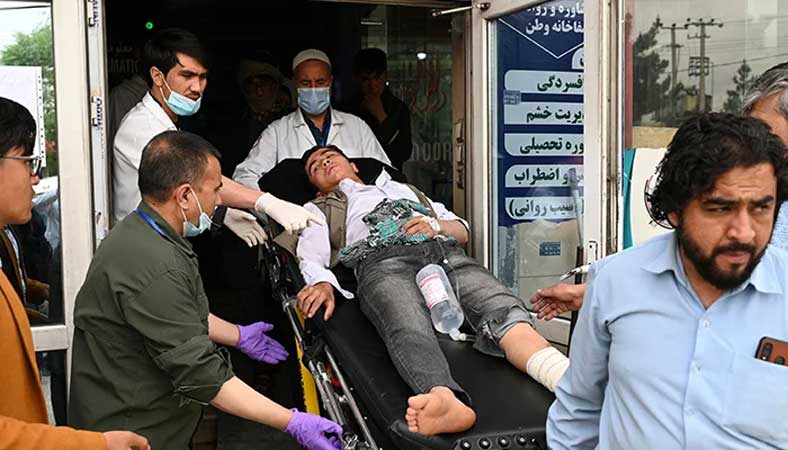 At least six people were killed and 24 wounded on Tuesday by two bomb blasts that struck a boys’ school in a Shia Hazara neighbourhood of the Afghan capital, police and hospital staff said.

The number of attacks in the country has significantly declined since the Taliban ousted the US-backed Afghan government in August, but the jihadist Islamic State group has claimed several attacks since then.

Several bodies were strewn outside the gate of a school in the densely populated Dasht-e-Barchi neighbourhood in Kabul, alongside patches of blood, burnt books and school bags, according to images posted on social media.

“We were leaving school and had just stepped out from the rear gate when the explosion occurred,” Ali Jan, a student who was wounded in the first blast, told AFP at a hospital in the area where the blasts occurred.

The second blast took place as rescuers arrived to ferry victims from the first explosion to hospitals.

“Some of our friends have lost hands, while some were covered in blood,” said Saeed Rahmatullah Haidari, a student at the school.

“There were pieces of broken glass and pools of blood… my whole body was shaking.”

Outside a hospital treating the wounded, Taliban fighters beat back the families of students who had gathered searching for information.

Women cried out as they scanned through pictures of victims posted on nearby walls by medics.

A grenade was also thrown at a nearby English language centre in the same area, wounding one person, he later said.

The Dasht-e-Barchi neighbourhood is mainly home to the Hazara community and has been previously targeted by the Islamic State group – a rival of the Taliban, also a hardline Sunni Islamist movement.

The Hazara community, which makes up between 10 and 20 percent of the country’s 38 million people, has long been the target of mass-casualty attacks, some blamed on the Taliban during their 20-year insurgency.

Since seizing power the Taliban have regularly carried out raids on suspected IS hideouts, mainly in the eastern Nangarhar province.

Taliban officials insist their forces have defeated IS, but analysts say the jihadist group is a key security challenge.

IS has claimed some of the deadliest attacks in Afghanistan in recent years.

In May last year at least 85 people — mainly girl students — were killed and about 300 wounded when three bombs exploded near their school in Dasht-e-Barchi.

No group claimed responsibility, but in October 2020 IS claimed a suicide attack on an educational centre in the same area that killed 24, including students.

In May 2020, the group was blamed for a bloody gun attack on a maternity ward of a hospital in the neighbourhood that killed 25 people, including new mothers.

Meanwhile, Pakistan on Tuesday strongly condemned the three terrorist attacks in Kabul that resulted in the loss of precious lives while injuring several innocent people.

“The government and the people of Pakistan extend deep sympathies to the families of those who have lost their lives and pray for the early recovery of the injured,” the Foreign Office said in a statement issued here.

The FO said Pakistan strongly condemned terrorism in all its forms and manifestations, adding “We stand with our Afghan brothers in this moment of sorrow.” “It is important that Afghanistan and the international community engage in close cooperation against the scourge of terrorism,” its said.