Daughters face too much pressure: Sahiba

* In a segment where fans sent in questions for the guests, Sahiba was asked whether she wishes she had a daughter 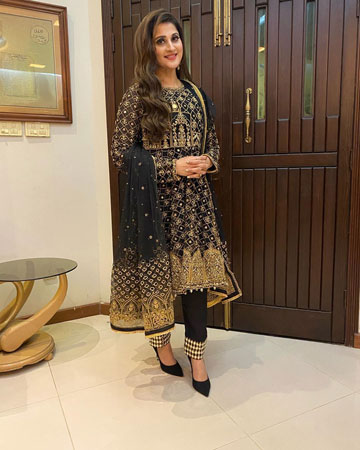 Pakistani film actor Sahiba Afzal recently made an appearance on Good Morning Pakistan with host Nida Yasir. The actor was accompanied by her husband, fellow actor Afzal Khan, better known as Rambo John, and their two sons Ahsan and Zain. During the show, Sahiba reflected on the difficulty of being a woman, and how she is thankful over the fact that she has no daughters.

In a segment where fans sent in questions for the guests, Sahiba was asked whether she wishes she had a daughter. To this, the actor responded, “I always wanted sons. I am thankful over the fact that God did not give me a daughter in this day and age, because daughters face too much pressure. Their whole lives they never get their own way. First it’s the parents’ pressure, then it’s the husband’s pressure. She has no will of her own. Girls don’t have a life of their own.”

She added later on, “I feel that boys can get their way. I wish I was a boy.” Her husband, however, had a different take on the matter, reflecting on his desire for a daughter. “I feel it. When my sons come in and meet my wife at night and then leave. I tell them, ‘Son, I am your father as well. It’s my wallet.’ I look at Shaan and his daughters and how they’re always around him. They love him so much. Saud doesn’t breathe without his daughter.”

When asked about her enduring good looks, Sahiba shares that it was simply due to the fact that she is still relatively young, despite her having adult children. Highlighting how she was married at a young age, she explained, “The trend nowadays is that, until a girl doesn’t become a woman, as in she doesn’t turn 30 to 35, she doesn’t get married. I was married by 19 and I became a mother at 20 as well. When I reach that age, my looks will get affected.”

When asked what kind of women she would like to see as wives for her sons, the actor shared candidly, “I would want Ahsan to marry a tall, fair and slim girl. For Zain, she should be very sweet, just like him. I wouldn’t want her to bother my son. I won’t tolerate it.” Her husband then interjected, “Imagine what a dangerous mother-in-law she will make. God have mercy.”