Amitabh Bachchan shuts down a person for criticising fan’s artwork 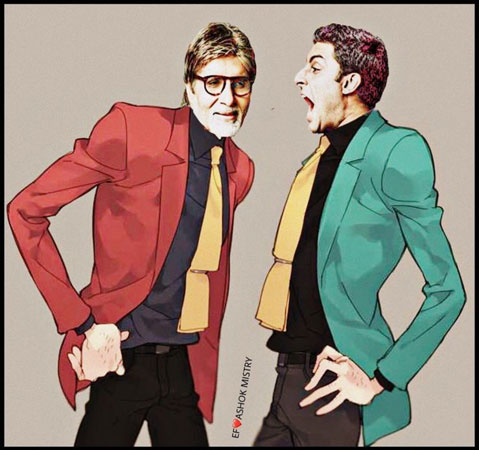 Veteran actor Amitabh Bachchan often shares artworks done by fans on his social media handles. Recently, he took to his Instagram account and shared a fan-art featuring him and his son, Abhishek Bachchan. In the artwork, he is clad in a red blazer, while Abhishek stands next to him in his green blazer. The fun piece shows them in a light moment, and received much love from other fans.

Bachchan captioned the post, “Ready to devour !! and let me tell you, you already have.” The previous day, he had shut down a person, who had criticised another artwork. They had criticised an artwork done by another fan account, reprimanding the creator for making something that has the actor’s face but someone else’s body and asked if she would like it if the same was done to her. Bachchan defended the artwork that has been deleted since then, mentioning that he likes it.

He had written, “Mujhe achcha lagta hai .. ab bolo hai koi jawaab? Art is art and I love the way it is being done .. please do some more @ef_ankita..do not pay attention to others.”

In his blog, Bachchan explained further. He wrote, “When art overtakes comment, when comment remains comment, when dislike remains aloof, the likes abound, when tears wipe away the muddied base, when fear of leaving is overcome by the joy of staying, when family is the force to reckon in multiples not singular, then shall art be prevalent beyond all.” He also called art a blessing and said, “Give creativity a chance! I am trying to make a living out of it.”

Meanwhile, on the work front, Amitabh Bachchan was last seen in Jhund, and is looking forward to the release of his film, Brahmastra. Recently, he had also expressed excitement that his grandson Agastya would be working with Zoya Akhtar for the film, The Archies.