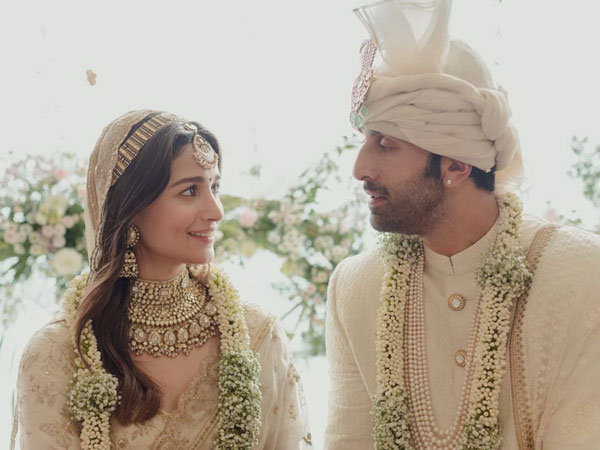 Actor Alia Bhatt was spotted publicly for the first time since her wedding festivities with Ranbir Kapoor, at the private terminal at Mumbai’s international airport on Tuesday.

She was accompanied by designer Manish Malhotra, who also designed her wedding ensembles.

Alia and Ranbir tied the knot in a close-knit ceremony last week, in the presence of family and friends at their Mumbai home. She wore a peach-coloured salwar suit as she posed for the paparazzi at the airport. The mehendi on her hands was still visible. Alia was filming for Karan Johar’s Rocky Aur Rani Ki Prem Kahani prior to her wedding, and it’s likely that she’s off to resume work on that film. Many fans hailed her simplicity. “So gorgeous,” wrote one while another said, “Alia has the new bride glow.”

Ranbir, on the other hand, has been spotted out and about on a couple of occasions since the wedding. The couple also had a mehndi ceremony a day prior to their nuptials, and organised a get-together for their film industry friends on Saturday evening.

Alia and Ranbir tied the knot in a close-knit ceremony last week, in the presence of family and friends at their Mumbai home

Alia shared the first pictures from the wedding hours after it was reported that she and Ranbir had tied the knot. She wrote in her post, “Today, surrounded by our family and friends, at home … in our favourite spot – the balcony we’ve spent the last 5 years of our relationship – we got married. With so much already behind us, we can’t wait to build more memories together … memories that are full of love, laughter, comfortable silences, movie nights, silly fights, wine delights and Chinese bites.

Thank you for all the love and light during this very momentous time in our lives. It has made this moment all the more special. Love, Ranbir and Alia.”

Alia and Ranbir will be seen together in a film for the first time later this year, when their epic fantasy drama Brahmastra finally hits the big screens after more than half-a-decade in the making. The couple started dating around the time the film entered production. Ranbir will first be seen in Shamshera, while Alia will soon begin shooting her Hollywood debut, Hands of Stone, starring Gal Gadot.