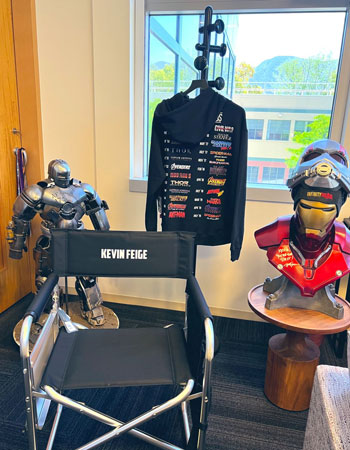 A recent glimpse of Marvel Studios’ boss Kevin Feige’s office has left fans excited after they spotted some cool memorabilia from the original Iron Man film in his work space. Disney’s marketing head Asad Ayaz recently tweeted out a photo from Feige’s office, where one can see a director’s chair with Kevin’s name on it, as well as an Infinity saga hoodie. But the most eye-catching pieces were the two Iron Man memorabilia, one of them a mid-sized Mark I figure. Ayaz tweeted the photo with a caption that read, “The awesome office of @Kevfeige on this momentous #ThorLoveAndThunder campaign launch day #MarvelStudios.” Of course, it makes sense that Kevin has two such significant pieces from the 2008 Jon Favreau directorial. The MCU movie, the first in a series of features, was a sleeper hit and launched the Marvel Cinematic Universe as we know it today. Not only did it establish the base of future Marvel films, but it was also responsible for redirecting Hollywood star Robert Downey Jr’s languishing career.