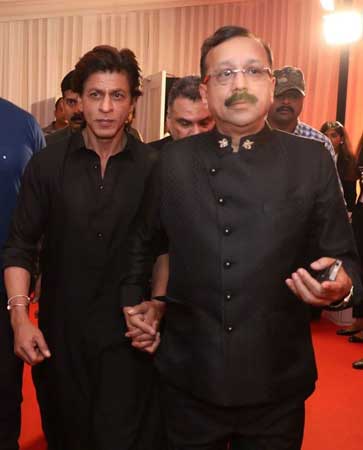 A number of Bollywood and Indian Telly Town celebs arrived at the star-studded affair hosted by the politician on Sunday. The annually anticipated glitzy bash – which was scrapped for the past two years due to the COVID-19 pandemic – took place this year at Taj Lands End in the suburbs of Mumbai.

Former actor of the Indian film industry, Salim Khan along with his sons, superstar Salman, Arbaaz, and Sohail Khan arrived at the bash and posed with the hosts.

Apart from Salman, his Bollywood frenemy Shahrukh Khan was spotted at the Iftar as well.

Furthermore, the lavish bash was not limited to Bollywood names only, as a number of Indian TV celebs graced the event dressed to the nines. Miss Universe 2021 Harnaaz Sandhu marked her presence at the bash too.

Moreover, as per the reports in the Indian media, chefs from Lucknow, Bangalore, and Kashmir flew to the metropolis to prepare a scrumptious meal for the guests.

Speaking to the media earlier about the event, host Siddique said, “Since we were in the middle of a pandemic, I decided not to host Iftaari for the last two years.”

“I really missed coming together with my friends and I am delighted that this year, our family is once again hosting the event. We can’t wait to see all our guests on the 17th of April,” he added.