* The two-part surprise began with the actress watching a personalised e-card that Donny had recorded, in which he wishes her a happy birthday and sings a song 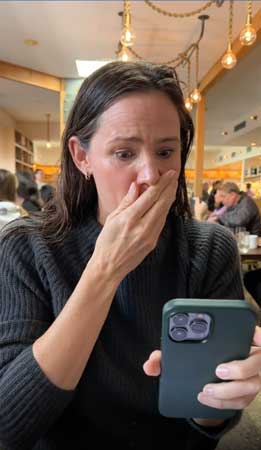 Jennifer Garner didn’t need to turn back time to fulfil a childhood dream! Days before her 50th birthday on April 17, the 13 Going on 30 star was out enjoying a bite to eat when she received the surprise of her life from none other than her old crush, Donny Osmond.

The two-part surprise began with the actress watching a personalised e-card that Donny had recorded, in which he wishes her a happy birthday and sings a song. What she didn’t notice, however, was the singer himself sneaking up behind her with a birthday cake in hand.

As the video came to an end, Donny began to sing the same birthday tune, causing Jennifer’s hands to fly up and cover her face. The actress then immediately stood up and pulled him into a hug.

In the adorable clip, which Jennifer later shared on Instagram, the flustered actress can be seen taking a moment to remove her sweater because she’s “so hot” before revealing the sweet message on the cake that Donny had made for her, which reads, “13 Going on 50! Love Donny.” The pair also sing a rendition of Donny & Marie’s 1975 hit, “Make the World Go Away.”

“My first birthday surprise was a doozy,” Jennifer captioned the April 15 post. “The one and only, legend in his own time, object of my childhood adoration and devotion- @donnyosmond showed up to knock my purple socks off.”

She added, “He took an hour and a half of his day to sit with me, sing my favourites and to give me a master class on how to be a class act. Thank you, Donny.” Jennifer also gave a sweet shout out to Marie Osmond and Donny’s wife, Debbie.

It turns out Jennifer wasn’t the only person thrilled by the surprise. Diane Keaton, Gwyneth Paltrow, Selma Blair and more all took to comments of the Instagram post to share their excitement, as did Rita Wilson, who wrote: “I seriously think this is the best surprise that could ever be! The joy!!!!”

Meanwhile, over on TikTok, Donny shared his thoughts on the sweet surprise. “Surprising fans is one of my favourite things to do, so when I had the opportunity to surprise the lovely @Jen Garner for her 50th birthday, I was overjoyed,” he wrote. “Thanks for letting me celebrate with you!”

The singer then sent another surprise her way, writing, “Next time you’re in Vegas, come see me at @Harrah’s Vegas so you can be my special guest on stage.”