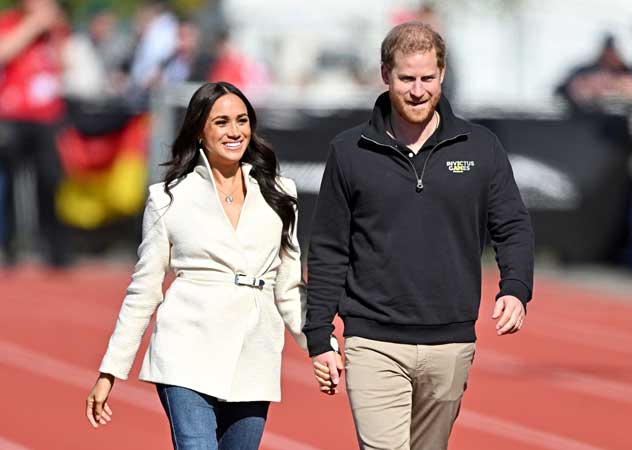 Meghan Markle and Prince Harry have a spring in their step! On April 17, the Duke and Duchess of Sussex celebrated Easter in the Netherlands by taking in some of the events at the Invictus Games. The royal couple, who married in 2018, appeared to be enjoying themselves as they attended a volleyball match and met with several of the Games’ inspirational athletes.

And of course, they did it all in style. While Meghan dazzled in a white Brandon Maxwell jacket, blue jeans and Manolo Blahnik heels, Harry opted for a comfy, casual look in a gray Invictus Games quarter-zip sweater and tan trousers. The couple’s fun in the sun comes one day after they caught the Games’ first event, the Jaguar Land Rover Driving Challenge, and later delivered speeches at its opening ceremony. Their two children, son Archie, 2, and daughter Lili, 10 months, are not in attendance on their current overseas trip.

While introducing her husband to the stage during the ceremony, Meghan shared that she “could not love and respect him more,” adding, “I know that all of you feel the same because he’s your fellow veteran, having served two tours of duty in Afghanistan and 10 years of military service.” Founded by Harry in 2014, the annual sporting event utilizes “the power of sport to inspire recovery, support rehabilitation and generate a wider understanding and respect for wounded, injured and sick Servicemen and women,” according to its website. The Games, which began on April 16, will be held in The Hague through April 22.

But Harry and Meghan weren’t the only royals out and about on Easter. On the same day, Kate Middleton and Prince William took their three children-Prince George, 8, Princess Charlotte, 6, and Prince Louis, 3-to the royal family’s Easter Sunday service at St George’s Chapel at Windsor Castle for the very first time.

Both Queen Elizabeth II and Prince Charles were not in attendance at the service.