Six get death for lynching Priyantha

* A total of 89 men, including nine minors, indicted in case related to mob lynching of Sri Lankan factory manager in Sialkot over blasphemy charges 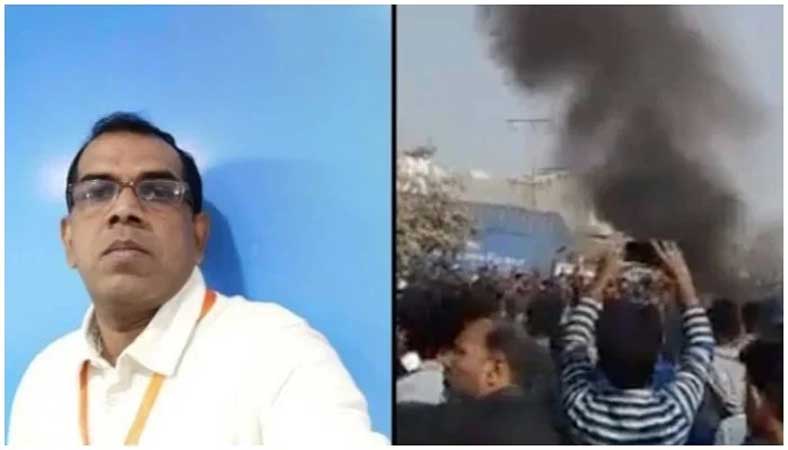 An Anti-Terrorism Court (ATC) Monday sentenced six accused to death for their involvement in the murder of Sri Lankan national Priyantha Kumara.

A total of 89 men have been indicted in the case, of which nine are minors. Among these, the court has awarded life imprisonment to seven, while 76 convicts have been awarded two-year jail.

Last year, a brutal mob beat to death and set alight Priyantha Kumara, a 48-year-old Sri Lankan citizen and factory manager in Sialkot. The then prime minister Imran Khan had condemned the vigilante justice and vowed to bring the perpetrators to justice.

The ATC completed the trial of the case in Kot Lakhpat Jail. Both the prosecution and the defence had concluded their arguments in the case that was heard on a daily basis. The statements of the investigating officers and eyewitnesses had also been recorded.

During the trial, presided over by judge Natasha Naseem, the prosecution had brought to court 46 eyewitnesses. Furthermore, it submitted as evidence the CCTV footage of 10 cameras installed at the site of the murder, as well as videos taken from the mobile phones of 55 accused men.

The investigation and trial were completed by a five-member team headed by public prosecutor Abdul Rauf Wattoo.

Kumara, working as a manager at a private factory on Wazirabad Road in Sialkot, was beaten to death in December by a mob after being accused of blasphemy in highly controversial circumstances.

The factory workers alleged that the foreigner had committed blasphemy, reportedly after he tore down some posters from the factory’s walls ahead of a scheduled inspection.

The mob subsequently murdered him and set his body on fire.

The mob had also vandalized the factory and blocked traffic, according to police.

The brutal murder elicited shock and drawn widespread condemnation from the Pakistani citizenry, senior government functionaries, including the prime minister and president, as well as the military’s top leadership, who promised to bring all those involved to the book.

Police had subsequently arrested more than 100 suspects for their suspected involvement in the case, including two individuals described as the main accused.

Many in the mob made no attempt to hide their identity and some took selfies in front of the burning corpse. The police claimed that the grisly incident took place on the factory premises and there was no way of knowing about it before that time.

When the police arrived at the scene, the victim had already been tortured to death and his body was being set to fire. “The police did try to stop the mob from setting the body on fire, but the rioters’ strength was overwhelming,” the official added.

Malik Adnan, a colleague who tried to rescue Kumara from the mob, was awarded with a certificate of appreciation by the then prime minister, Imran Khan, in recognition of his bravery to safeguard the victim while risking his own life.

The civil and military leadership of the country saluted the moral courage and bravery of Adnan and announced awarding him Tamgha-e-Shujaat.

The heartening footage of Adnan trying to save the Sri Lankan national from the wild-eyed, rabid mob came to the fore soon after the incident, earning praise from the entire nation.

In the CCTV footage, Adnan was seen confronting a group of angry men all by himself and making desperate attempts to avert the flare-up. He was then seen trying to shield the man from the angry mob, who were baying for blood.