Over 20 wounded in new Jerusalem violence 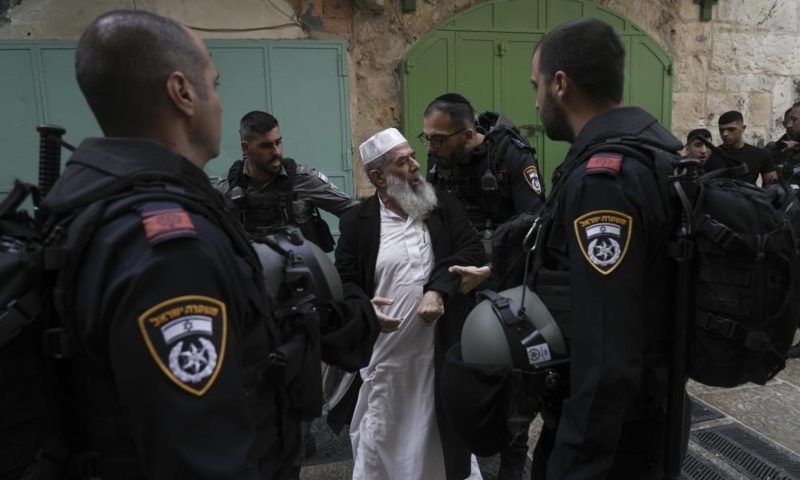 More than 20 Israelis and Palestinians were wounded on Sunday in several incidents in and around Jerusalem’s flashpoint Al-Aqsa Mosque compound, two days after major violence at the site.

The latest clashes take the number of wounded since Friday to more than 170, at a tense time when the Jewish Passover festival coincides with Ramazan.

They also follow deadly violence in Israel and the occupied West Bank in late March and early this month that has killed 36 people.

Jews are allowed to visit but not to pray at the site, also known as Temple Mount, the holiest place in Judaism and third-holiest in Islam.

The police said its forces had entered the compound in order to “remove” the demonstrators and “re-establish order”.

The Palestinian Red Crescent said 19 Palestinians were wounded, including at least five who were hospitalised. It said some had been wounded with rubber-coated steel bullets.

An AFP team near the entrance to the compound early on Sunday morning saw barefoot Jewish worshippers leaving the site, protected by heavily armed police.

Video released by the police showed two Israeli buses, their windscreens and side windows smashed in, driving down a road near the Old City as young men showered them with rocks. The police said they had arrested 18 Palestinians.

Senior Palestinian official Hussein Al Sheikh said on Sunday that “Israel’s dangerous escalation in the Al-Aqsa compound … is a blatant attack on our holy places”, and called on the international community to intervene.

The chief of the Hamas, which controls the Palestinian enclave of Gaza, warned Israel that “Al-Aqsa is ours and ours alone”.

“Our people have the right to access it and pray in it, and we will not bow down to [Israeli] repression and terror,” Ismail Haniyeh said in a statement.

Later on Sunday morning, mosques in Palestinian neighbourhoods of annexed east Jerusalem broadcast calls for people to head towards the Al-Aqsa compound.

Weeks of mounting tensions saw two deadly attacks allegedly by Palestinians in or near the Israeli coastal city of Tel Aviv in late March and early April, alongside mass arrests by Israeli forces in the occupied West Bank.

A total of 14 people have been killed in attacks against Israel since March 22, including a shooting spree in Bnei Brak, an Orthodox Jewish city in greater Tel Aviv.

Twenty-two Palestinians have been killed over the same period, according to an AFP tally.

On Friday morning, police clashed with Palestinians in the Al-Aqsa compound, including inside the Al-Aqsa mosque, drawing strong condemnation from Muslim countries. Those clashes wounded some 150 people.

The United Nations has called for calm, a year after clashes in and around the mosque compound escalated into an 11-day war between Israel and Palestinians in Gaza.

Pope Francis called on Sunday for free access to the holy sites in Jerusalem and prayed for peace in the city.

“May Israelis, Palestinians and all who dwell in the holy city, together with the pilgrims, experience the beauty of peace, dwell in fraternity and enjoy free access to the holy places in mutual respect for the rights of each,” he said in his Easter address.

Despite the tensions, a few streets away from the Al-Aqsa compound hundreds of Christians staged a noisy parade through the alleys of Jerusalem’s Old City to mark Easter at the Church of the Holy Sepulchre where they believe Jesus was crucified.

Marching bands led the processions with drumming and bagpipes before worshippers gathered in the cavernous church for mass.