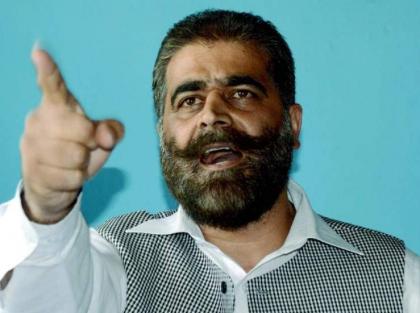 In a message from Tihar Jail the incarcerated Hurriyat leader while highlighting Peoples League (PL) chairman S Hameed’s peerless contribution towards the ongoing freedom struggle said that martyred leader was a man of integrity who served the movement throughout his life and ultimately laid down his life for the national cause.

Lauding the PL chairman’s selfless services for the Kashmir cause, Khan said, the martyred leader would be remembered for long in the annals of Kashmir’s resistance history. Khan, who along with other Hurriyat leaders has been languishing in Tihar jail for the past several years, said that the unprecedented sacrifices rendered by Kashmiris have brought Kashmir issue to limelight at international level. He expressed the hope that the day was not far when Kashmiris would achieve their cherished goal of freedom from Indian domination.

The APHC leader voiced his grave concern over the continued bloodshed and violence in the region saying that innocent people were being killed day in and day out by the Indian occupation forces deployed in length and breadth of the valley.

Citing a recent incident in the valley Khan said that occupation forces have crossed all limits of cruelty and barbarism in Kashmir. “Killing and maiming of Kashmiri youth has become new norm in Kashmir”, he said.

Urging the world human rights bodies to mount pressure on the government of India to stop the bloodbath of Kashmiris he said that the world community’s indifference towards the sufferings of Kashmiris has emboldened the Indian government to take further repressive measures to suppress voices of dissent in the region.

The ruthless suppression of dissent in the region, he said, had resulted in the wholesale arrests and imprisonment of political workers, civil and rights activists. He said that a large number of Kashmiris who have been arrested before and after 5 August 2019 have been languishing in different jails in different Indian states far away from their homes.