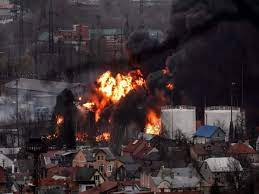 Lviv: Five “powerful” Russian missiles hit Lviv on Monday, a city in the west of the Ukraine that has so far been spared much of the fighting since Russia invaded its pro-Western neighbour nearly two months ago, the city’s mayor said.

Lviv resident told AFP they could see thick clouds of grey smoke in the sky above some blocks of flats. The city’s mayor, Andriy Sadovy, wrote on Telegram that rescue services were at the site.

The strikes in Lviv come as Russian forces have over recent days been intensifying strikes on the capital Kyiv further east, targeting several facilities that produce military hardware.

“Five powerful missile strikes at once on the civilian infrastructure of the old European city of Lviv,” Ukrainian presidential aide Mykhaylo Podolyak wrote on Twitter.