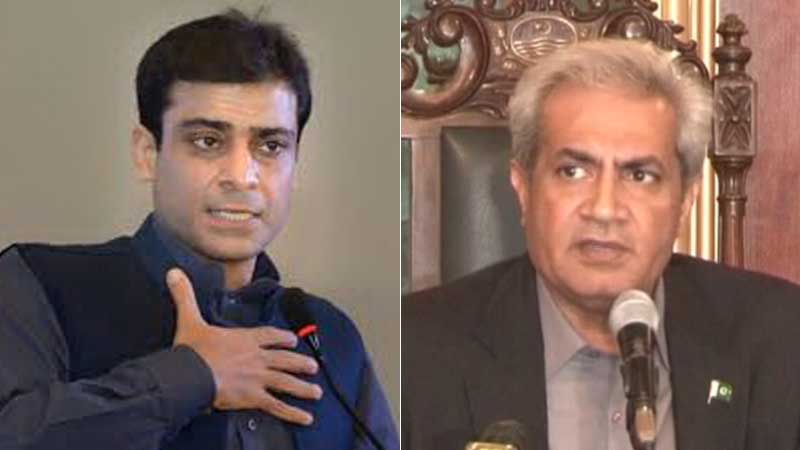 The swearing-in ceremony of Punjab Chief Minister-elect Hamza Shehbaz appeared to be hanging in the balance as Governor Omer Cheema, who has reportedly been sacked by the federal government, refused to administer oath to the new leader of the house.

Cheema held consultations with Elahi, former chief minister Usman Buzdar and the constitutional team about the status of the Saturday’s assembly session in which Hamza was elected as chief minister after a violent confrontation between opposition and treasury benches lawmakers.

The governor had decided to send the constitutional recommendations to the president, which will be reviewed by his legal team.

Speaking to the media earlier in the day, Cheema condemned the violence which took place in the provincial assembly on Saturday. He underlined that such incidents set a very wrong precedent. “I am a political worker and have fought elections. This is a very wrong precedent being set,” he added.

He alleged that CM-elect Hamza had used state powers on the polling day against his opponents – PTI and PML-Q. If he had enough votes, then he should not have made the polling process controversial by creating unrest in assembly hall, he added.

He also raised question over the legal status of this election and asked whether the election for Punjab’s chief minister were conducted as per the Lahore High Court’s directions. He highlighted that he had summoned a report from the Punjab Assembly secretary related to the ruckus and violence that took place during the session on Saturday.

He also said that Deputy Speaker Dost Muhammad Mazari acted in a ‘partisan way’. His office will write letters to the advocate-general of Punjab as well as the speaker related to the polls. He said sitting in a constitutional office, he cannot endorse an unconstitutional act.

“I will start these [oath-taking proceedings] once I am satisfied that these elections were conducted according to the Constitution and LHC’s order,” Cheema maintained.

On the direction of Prime Minister Shehbaz Sharif, Punjab Governor Cheema was removed from his office, on Sunday, after he postponed the swearing-in ceremony of the chief minister-elect and sought an inquiry report from Punjab Assembly Speaker Pervaiz Elahi over the election of the new chief minister. The development was confirmed by PML-N spokesperson Marriyum Aurangzeb. Reports said Prime Minister Shehbaz Sharif had sent a summary to President Arif Alvi for the removal of Governor Cheema. The summary was moved under the discretionary powers given to the premier.

Pakistan Tehreek-e-Insaf (PTI) leader Fawad Chaudhry denied the removal of Cheema as Punjab Governor. He President Arif Alvi has refuted the news regarding the removal of the Punjab governor and added no such summary has been sent to the President’s House. Cheema will continue to discharge his duties as Punjab Governor as the authority to remove him lies with the President of Pakistan, Fawad Chaudhry added.