‘KGF 2’ — too much sound, a lot of fury and little impact 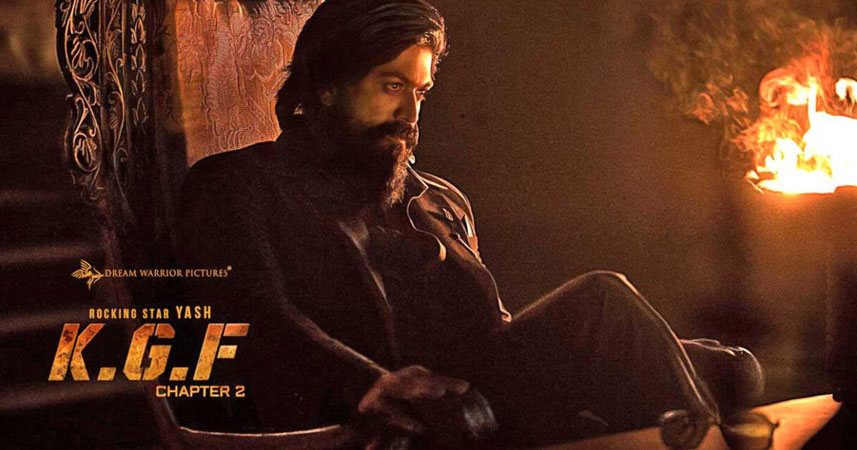 The most striking aspect of KGF part one was its setting. At every opportunity, the camera pulled all the way back so that we could get a bird’s eye view of the massive gold mines of Kolar burrowed deep in the earth and there, toiling away ceaselessly, millions of faceless men and women. Slaves really, yoked to their back-breaking work without pause, trodden under the iron boots of their cruel masters.

Its scale reminded you of those old MGM movies set in biblical times. The humans who strode about in KGF had to yell and shout in order to be seen and heard. Therefore, the background music which had you reaching for ear-plugs. And therefore, larger-than-life characters, led from the front by Rocky (Yash), who announces his arrival as both messiah and avenger, rolled into one.

KGF Part 2 is more of the same, only bigger. But alas, not better, despite the film corralling such Bollywood stars as Sanjay Dutt and Raveena Tandon, and branching out of the country, to dip its shovel in the Middle East, with its lighter patina of brown and beige, the darker shades reserved for the Kolar gold fields, which form the burnt-earth backdrop for the doings of our hero Rocky and his faithful denizens.

His unruly mane is still the same, but this time around Rocky appears in a series of sharp suits, standing out against the thousands of extras dressed in mud-brown humble clothes. What’s also familiar is the swagger, and the dialogue delivery, which he gets to scatter amongst an array of characters – a very bad guy kitted out in tattoos and a complicated hair-do called Adheera (Sanjay Dutt), an Indian prime minister who looks and sounds like Indira Gandhi (Raveena Tandon), a bunch of rivals spread across the length and breadth of India, a CBI officer hot on his tracks, and gaggles of cops who regard him with dread and fear.

The trouble with films busy working on their look is that they forget about plotting. The film swings haphazardly between the past, which shows us Rocky’s devotion towards his mother (Archana Jois), and the present, in which he swings between being a saviour and the guy who cracks the whip and roars at the workers to never stop working. Good guy compelled to do bad things by dint of circumstance, or bad guy with a golden heart? Not for us to make too fine a point on that faint distinction because as far as KGF 2 goes, Rocky is no ‘gangster’, only the ‘Master who enters and conquers’.

To that end, we get set-pieces after set-pieces in which Yash swings heavy hammers and pulverizes armies of goons, some who look as if they’ve wandered out of the sets of ‘Mad Max Fury’, some from the old Westerns. Srinidhi Shetty is the heroine-there-only-to-buoy-the-hero. Dutt, in his ‘Agneepath’ avatar minus the menace, should have made a worthy enemy, but is made to do nothing but open his mouth and roar. In her tasteful saris, and that trademark white streak in the hair, Raveena Tandon leaves a little more impact: she is also responsible for an act which has ensured the erasure of the wild and valorous deeds of Rocky from our history books. The ladies are besides the point, though: like the previous one, this film too is about men and machismo and muscle, all oiled and shiny and ripped; the audience dutifully chortles when a misogynistic remark or two comes out of the hero’s mouth, as he turns to the real business at hand- to up the blood-soaked violence quotient at every turn.

As Prakash Raj’s raconteur says, with a smirk, ‘don’t dramatise it so much, after all it’s fiction, right’? With the exception of these moments, and some bits of the action, KGF 2 comes off largely dull. Too much sound, a lot of fury, little impact.