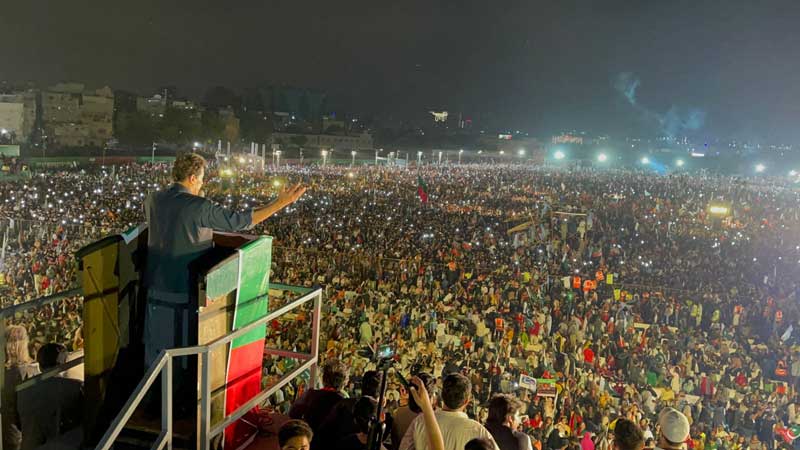 Former prime minister and Pakistan Tehreek-e-Insaf (PTI) Chairman Imran Khan has regretted that the country’s higher judiciary didn’t take suo motu notice of ‘horse-trading’ but opened doors of courts at midnight to ensure that he was ousted from power.

Addressing his party’s grand power show at Karachi’s Bagh-e-Jinnah on Saturday, he lamented that the courts started opening because some people feared that he will abrogate the Constitution. “I ask the judiciary a prime minister of a country has been threatened… shouldn’t there be any investigation [before issuing the verdict],” he added.

He said that what crime he had committed that the courts were opened at midnight. “What crime had I committed? The person who had named his party on justice… I was the person who stood for judiciary against Musharraf… I am the only politician in Pakistan who was declared sadiq and ameen by courts,” he added. He asked the country’s judges what the Constitution says about those MNA who were elected on PTI’s mandate and later “sold their conscious for Rs200 million”.

“I ask the judges with respect that shouldn’t you had taken a suo motu action,” he said.Imran Khan said that he is not against any country or region but wanted relations on basis of equality. “I want friendship with everyone but slavery of none.” He said that a “big international conspiracy” has been hatched against the country. “I am not anti-Indian, anti-European or anti-American… I believe in humanity,” he added.”This is a conspiracy against our country … I want you to carefully listen if this was a conspiracy or an interference,” he said, indirectly referring to Inter-Services Public Relations (ISPR) Director General Major General Babar’s recent remarks in a press conference where he said that the word “conspiracy” was not used in the statement issued after a meeting of the National Security Committee last month but had acknowledged that a demarche was issued for “interference”.”Raise your hands and tell me if it was an interference or a conspiracy,” Khan asked his audience. “There was a conspiracy against this country at a very vast international scale,” he reiterated. “I want to tell the nation that I never am against any country. I’m not anti-India, anti-Europe or anti-US. I’m with the humanity of the world. I’m not against any nation. I want friendship with everyone but slavery with no one.”Khan claimed that he came to know three to four months back that the turncoats who left his party as well as some journalists had started having meetings in the US embassy. “A journalist told me that ‘a lot of money is being spent on us’. Thus, the conspiracy had been in the works for a while and then our US ambassador meets Donald Lu.”The PTI chairman said he stood by his decision to say “absolutely not” to the US when asked for military bases. “A country’s prime minister is like the father. The 220m people were my responsibility, and to take them into someone else’s war was my responsibility. I will never sacrifice my people for another country.”Khan slammed Shehbaz Sharif, his successor in the top office. “There are 40bn rupee corruption cases on Shehbaz in NAB and the FIA. What more insult of our country can it be that a person out on bail is the prime minister,” he said.”His son, also out on bail, is the chief minister. Think carefully what is happening with our country. They make thieves our leaders because they can be easily used. They get ready to do everything to protect their money.”The PTI chairman identified Shehbaz’s elder sibling Nawaz Sharif as the “mastermind of this conspiracy”. “The one who is sitting in London, who ran away from the law after lying is now preparing to return. The entire Pakistan’s justice system is on trial. Can it stand against these powerful thieves or not? I ask the courts and NAB … what will you do?”Khan told his followers that God has given them two paths to choose from. “There is no other third path. You cannot be neutral. It is God’s order.”He demanded that a judicial commission be made under the chief justice of Pakistan’s supervision to decide on the merits of his claims regarding the cable and foreign conspiracy. Furthermore, he demanded that the foreign funding case against his party be heard together with similar cases against PML-N and the PPP.The former prime minister urged his supporters to “remain peaceful and not do politics of confrontation”. We have always done peaceful protests and our movement will remain peaceful. I want to warn … don’t do anything that this movement changes [into something else] because I don’t want to see this country suffer in any way.”