Who needs the Maldives! Sapphire seas. White-sand beaches. A favourite of Kate

* Fins are out to say hello 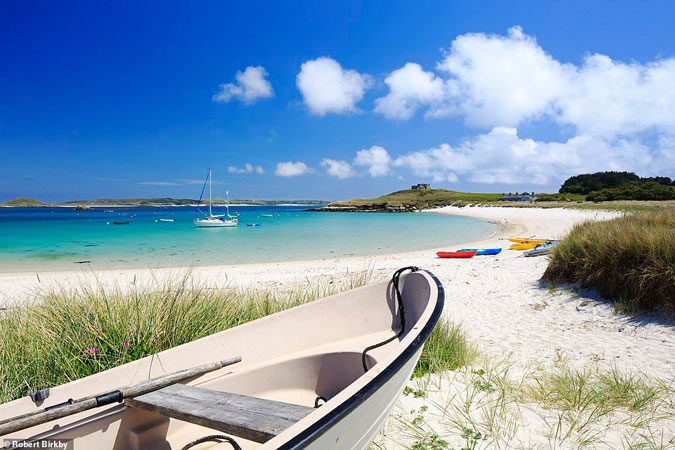 Scudding across sapphire seas, salty wind in hair, the boat ride from Bryher to St Martin’s, the most northerly island in the Isles of Scilly, is spectacular – yet it’s about to get better.

It’s the skipper who sees the shadows first and turns the Firethorn passenger boat to edge a little closer. Apart from the rasping gulls and lapping water, all is quiet. Then out of nowhere they come. Dolphins! In twos and threes at first, then a whole pod surfing alongside the boat.

Fins are out to say hello. One by one they twist, leap and somersault out of the water – showboating as if auditioning for a part in a musical.

It turns out that these islands, 28 miles off the coast of Cornwall, are generous with standing-ovation-worthy moments such as these. And it starts with your arrival.

While you can reach the archipelago on the trusty Scillonian III ferry – almost three hours through choppy waters from Penzance – you can also travel in starry fashion by helicopter. The newly revamped service whisks travellers from Penzance Heliport to the islands of St Mary’s or Tresco in just 15 minutes. It’s a magical way of arriving, sweeping you over inky seas dusted with glistening foam.

The craggy headland of Cornwall is left behind in no time at all before arcs of talcum-powder-white sand give promises of blissful days to come. It’s as if you’ve arrived in the Maldives.

There are about 140 islands that make up the Isles of Scilly, with just five inhabited. The largest, St Mary’s, is a good place to start your adventure.

Meander along Hugh Town’s main street, dotted with a cluster of tiny gift shops, cafes and galleries, and it’s as though you’ve stumbled upon a seaside town straight out of the 1940s.

On the edge of the harbour is Mermaid Inn, a haunt of fishermen since the early 1950s. It reflects the islands’ maritime history with ships’ wheels, paddles and nautical flags. It also serves a mean fish pie.

For something uniquely Scillonian – stained-glass art or puffin-printed ceramics, perhaps – pop into Phoenix Craft Workshops, which is home to a number of local artisans. Talking of which, next month the Creative Scilly festival (May 13 to 22) celebrates the talent of home-grown artists, musicians, writers and craftspeople with events and concerts across the island. Expect stomping sea shanties and hands-on workshops where you can learn a new – and locally influenced – craft.

For such a small region, there’s a surprisingly rich calendar of events to tap into.

Starting this week, Walk Scilly will see local guides reveal the hidden natural gems found across the islands as spring bursts forth, with visitors able to join garden tours and sunset strolls.

Indeed, sunsets are a highlight when staying on St Mary’s. It may be the largest of the islands, with a population of about 2,000, but it is still tiny, with a circumference of just nine miles. It means that most people can walk the entire coastline, discovering sheltered coves and rocky crevices as you go. Briar-trimmed lanes will take you inland, past fields of wild flowers and, in the spring, glorious, scented narcissi, until you reach the charming gardens at Carreg Dhu in the centre of the island.

On the highest point, Star Castle Hotel offers an elevated place to stay – in all senses of the word. Dating from the 16th Century, the family-run luxury hotel is found within star-shaped garrison walls with many original features still intact, including a detention cell at its entrance.

There are spacious, modern family rooms, while a heated swimming pool and tennis courts are set in the palm-tree-fringed garden.

There’s also local pinot gris and pinot noir, made by the Star Castle’s owner Robert Francis. His hands-on approach to hospitality extends to him personally catching fresh lobster each day for the hotel’s two restaurants.

You can dine in The Conservatory in the grounds, sitting under leafy vines that have grown with abandon across the ceiling. Inside the castle is the more formal, stone-walled Dining Room.

B&B costs from £189 per room per night, based on two sharing.

The only way to get under the skin of the Scillies is to hop around, and it’s easy to do so, taking just 15 to 20 minutes to reach anywhere using the many tripper boats.

Tresco is probably the most famous and the most manicured of the five inhabited islands. Part of the Duchy of Cornwall, it is run by the Dorrien-Smith family and has long had the Royal seal of approval, with Prince Charles and Camilla often popping over and William and Kate choosing it as their holiday destination of choice for the past two years.

Blue-and-white painted cottages sit on winding lanes, with nodding lilac agapanthus in their gardens and blushing pink roses at their doors. The kingfisher-blue of the sea is always in sight, while children whizz round on bikes or go crabbing on one of the idyllic icing-sugar beaches, such as Appletree Bay. It’s as if you’ve stepped into the pages of an Enid Blyton book.

A walk through some impossibly pretty lanes will take you from New Grimsby Sound to Green Porth, where the seaside Ruin Beach Cafe serves wood-fired pizzas, seafood platters and crab linguine.

In the south of the island is the subtropical Tresco Abbey Garden, found within the ruins of a Benedictine priory.

Here red squirrels, which were introduced in 2013 in an effort to protect Britain’s plummeting native population, scamper up towering palms, fern trees from New Zealand look monstrously huge and oversized succulents come in shades of blood-red and neon green.

Tucked away in a corner is the Valhalla Museum, a collection of oddly poignant figureheads collected from shipwrecks around the islands and which seem to hold tight the secrets of sailors and smugglers.

There are treasures to be found around every corner – a pretty shell grotto, perhaps, or a carved head of Neptune at the top of crumbling granite steps.

It turns out that these islands, 28 miles off the coast of Cornwall, are generous with standing-ovation-worthy moments such as these. And it starts with your arrival

For something more low-key, Bryher is the smallest island and the most beautifully rugged. Untamed paths dotted with honesty boxes selling locally-grown courgettes, salad leaves or apples, lead you to secluded, windswept beaches.

At Veronica Farm you can pop in for handmade fudge, while at the Crab Shack you can eat shellfish straight from the boat.

In the north of the island, Hell Bay is a Hamptons-style clapper-board hotel – its ominous name is a reference to the number of shipwrecks that have occurred off its coastline. You go to sleep to the sound of the crashing high rollers of the Atlantic and awaken to the most incredible light.

B&B costs from £75pp per night, based on two sharing.

At Hut 62, on Green Bay, you can hire paddle boards, kayaks and boats.

It’s then easy to reach the nearby uninhabited island of Samson – look out for seal colonies on the rocks and the ruins of stone cottages, a reminder of the families who lived here until 1855.

But for perfect castaway moments you can’t beat St Agnes. Scavenge for sea glass and cowrie shells on Periglis Beach or, for pure isolation, wait for low tide and walk across a sand bar to the tiny island of Gugh. Every Wednesday a wildlife safari run by St Agnes Boating and the Wildlife Trust will give you the chance to see puffins, porpoises and Manx shearwaters in the wild For pure heart-stopping scenery, however, head to St Martin’s.

After you arrive at the quay it is a 20-minute trek to the best beaches at Great Bay and Little Bay, on the east of the island. You’ll tramp along paths overgrown with blackberries until you reach the sea grass that edges the shore.

Here the sand twinkles with iridescent shell particles and is dotted with starfish and translucent jelly fish. The sea, with its myriad tones of blue, is so fantastical you half expect a mermaid to emerge from it.

With just one shop, a handful of cottages and Karma – the only hotel – life here is slow and uncomplicated. B&B costs from £200 per room per night, based on two sharing.

You can spend the day dipping in the sea, and maybe enjoying a crab sandwich at the family-run Seven Stones Inn, watching the boats bob by.

By night, for just £5pp you can star-gaze at Cosmos, the island’s community observatory. It’s a little slice of heaven.