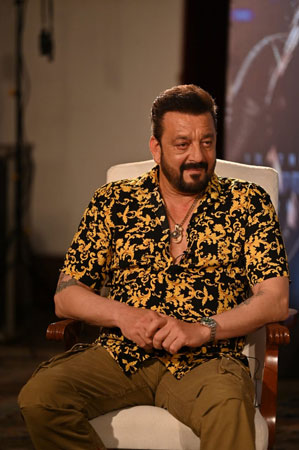 Actor Sanjay Dutt has always been open about the controversial episodes in his life, especially his struggle with addiction and his incarcerations.

In a new interview, he revealed how difficult it was to bounce back from addiction and how poorly he was treated after his stint in rehab.

In a chat with YouTuber Ranveer Allahabadia, he said that doing drugs was the ‘cool’ thing at the time. On how he ‘bounced back’, he said, “I had to make up my mind. What happens when you’re into intense drug addiction, you become a loner. I had become like that. I was a hard nut to crack, and I was at the rehab centre for two years, which is rare. I couldn’t just accept that I was a drug addict.”

However, when he experienced fun activities with other patients at the rehab centre, he realised that he had missed out on a lot. “This is what life is, why was I missing that. Ten years of my life I was in my room, or in the bathroom, and not interested in shoots. But this is what life is, and that’s how everything changed.”

Talking about how he bounced back, he said, “When I came back, people used to call me charsi. And I thought, galat hai yeh. People on the road are saying this. Kuch karna padega. So I started working out. I wanted to break though that. And then from charsi, it became a guy with swag and ‘kya body hai’.”

Sanjay Dutt also opened up about his cancer diagnosis in 2020, and said that he couldn’t hold back his tears as he broke the news to his wife and kids. He also spoke about how the family chalked out his treatment plan and how filmmaker Rakesh Roshan recommended a doctor to him. Sanjay Dutt was last seen in the recently-released KGF: Chapter 2, as the villainous Adheera. The film has broken multiple box office records.