Neetu reacts to fans noticing Rishi’s name on her mehndi 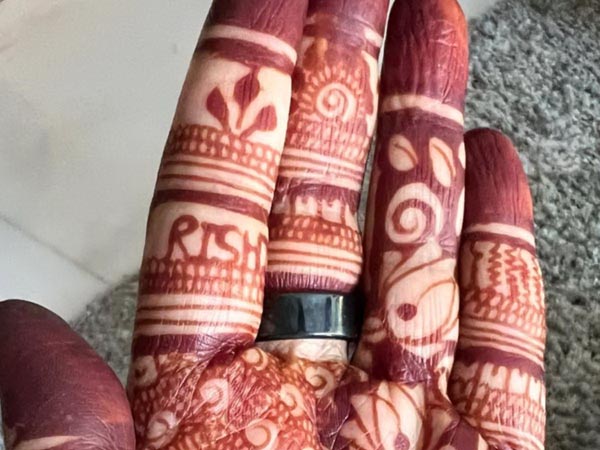 Ranbir Kapoor’s mother, Neetu Kapoor, returned to work just a day after his wedding to Alia Bhatt. She was spotted on Friday on the sets of the reality show Hunarbaaz. Posing for the paparazzi, she expressed surprise at how observant fans are; people noticed her late husband Rishi Kapoor’s name written in henna on her hand. “Sab dekhte hain,” she said, holding up her palm. “Naam, sab dekhte hain.” Neetu complained a little about posing in the humidity, but obliged the photographers. Neetu and Riddhima were the ones who confirmed that Alia and Ranbir’s wedding would indeed take place at his Mumbai home in Bandra.

Later, she posted several pictures from the wedding and the pre-wedding ceremonies on social media. “My world,” she captioned a post containing Ranbir and Alia’s wedding photos. Sharing a picture with Riddhima, Rima Jain and Natasha Nanda, she wrote, “Happy group after the most amazing celebration.” Neetu dedicated the union to Rishi Kapoor, who died after a two-year battle with cancer in 2020. “This is dedicated to kapoor Saab ?? your wish has been fulfilled,” she wrote, alongside a picture of herself with Ranbir. Alia and Ranbir dated for five years before tying the knot. They fell in love while working on their upcoming film Brahmastra, directed by Ayan Mukerji. Announcing the wedding, Alia shared a bunch of photos on Instagram. She wrote, “Thank you for all the love and light during this very momentous time in our lives. It has made this moment all the more special.”