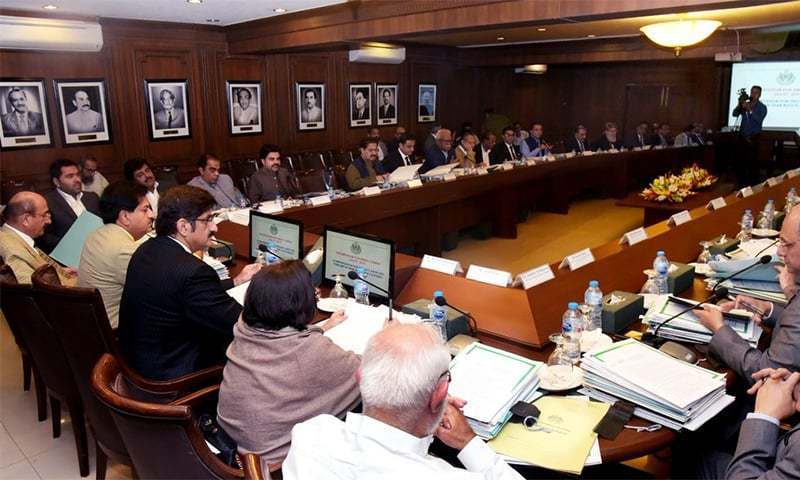 The meeting was held here at CM House on Friday and was attended by all the ministers, advisors, special assistants, new Chief Secretary Sohail Rajput, Chairman P&D Hassan Naqvi and concerned secretaries, said a statement.

However, he directed the Sindh Katchi Abadis Authority (SKAA) to revisit the regularisation act and remove ambiguities, if any and table the agenda item in the next cabinet meeting.

Chairman P&D Hassan Naqvi briefing the cabinet on Mid-year review (MYR) of ADP 2021-22 said that overall Rs 77.875 billion were released, of them Rs 43.777 billion were utilised.

He added that 825 out of 1,034 schemes would be completed during the current financial year.

The meeting was told that 235 schemes have been reported as un-satisfactory by P&D.

At this the chief minister directed the P&D department not to release them funds and directed the concerned departments to examine their schemes declared as unsatisfactory and report him.” I’ll not tolerate substandard works,” the CM said.

Sindh Katchi Abadis Authority floated a proposal in the cabinet to launch a low-housing scheme at various locations in the province for shelter and needy people.

The effect of people on anti-encroachment drives could also be shifted to low housing schemes.

The cabinet was told that the SKAA has already launched Sasti Basti schemes at different locations of the province.

The cabinet approved the proposal and directed the Board of Revenue to identify lands all over Sindh for low housing schemes and simultaneously directed SKAA to prepare a plan for launching such schemes.

The cabinet was told that SKAA have inventorised 1448 unauthorised settlements existing partially or wholly on government land on or before 30 June 1987 for declaration as katchi abadis under the Act 1987. Whereas, a large number of unauthorised settlements have been established after the present cut-off date that is June 30, 1997 which could not be regularised under the present law.

In order to provide relief to dwellers of those Katchi abadis spread all over Sindh, there is need to extend cut-off-date for regularisation of Katchi abadis in Sindh from 30 June 1997 to 31 December 2011, therefore the cabinet approved amendment in the Sindh Katchi Abadis Act 1987.

A committee for appointment of all categories of differently abled persons was constituted which presented their recommendations.

The committee has recommended changes and relaxations as part of the Recruitment Rules for Persons with Disabilities keeping in mind the difficulties and hardships they are facing in the process of recruitment for implementation of five percent job quota.

The recommendations include the upper age limit for Government jobs shall be relaxed by 15 years for candidates with disabilities.

Conditions of experience shall not be compulsory for persons with disabilities as they are already deprived of jobs.

The provincial cabinet approved the constitution of Sujawal as ‘Civil District’ to fix the limits of the district and determine its headquarters.

The cabinet amended different laws such as Stamp act, Sindh Gothabad Act and others for clarity.