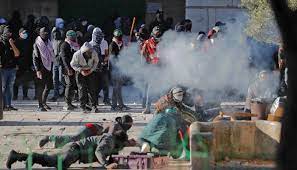 JERUSALEM: Tensions have been increasing in Jerusalem, as the Muslim holy month of Ramadan coinciding with the Jewish celebration of Passover and Christianity’s Easter festival this year.

Over a 100 Palestinians have been injured after Israeli police raided the Al-Aqsa Mosque compound in occupied East Jerusalem, sources reported

As per the publications, the Islamic endowment that runs the site said Israeli police entered in force before dawn on Friday, as thousands of worshippers were gathered at the mosque for early morning prayers.

Videos circulating online showed Palestinians throwing rocks and police firing tear gas and stun grenades. Others showed worshippers barricading themselves inside the mosque amid what appeared to be clouds of tear gas.

The Palestinian Red Crescent ambulance service said it evacuated the majority of the wounded to hospitals, Sources deliver.

Meanwhile, Palestinian media said dozens of injured worshippers remained trapped inside the compound as Israeli forces had hindered the arrival of ambulances and paramedics from reaching the mosque.

However, it is to be noted that the Israeli raid is likely to incite violence as a large number of worshipers are expected today for Friday prayers.