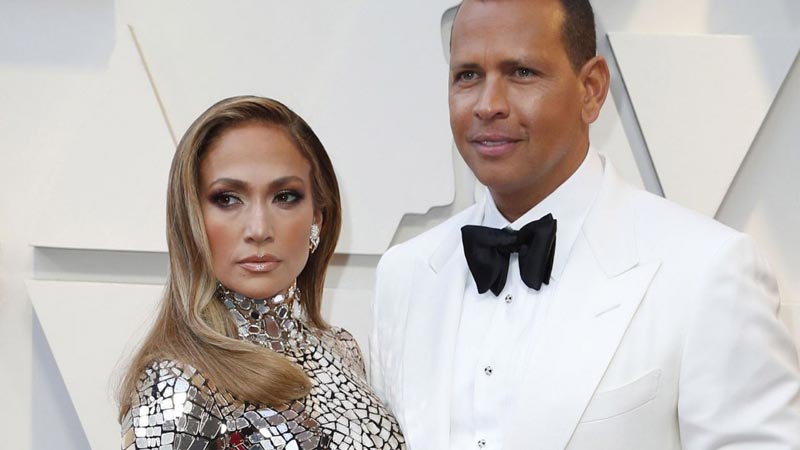 “It’s a great time in sports,” he began. “You have a new Masters champion, the NBA playoffs are about to start, baseball’s in the full swing, people getting engaged. I mean it’s a happy time in the world.”

Rodriguez laughed off Kay’s comment and added, “Happiness and world peace is what we’re looking for.” After hearing his reply, Kay joked, “You know what? I think of Gandhi and you.” But Rodriguez seemed ready to shift the attention back to the game, bringing up the 2-1 pitch.

Rodriguez and Lopez got engaged in March 2019, almost two years after they made their red carpet debut as a couple. But in March 2021, reports spread that the pair had split. While the former Yankees player and the singer insisted that “all the reports are inaccurate” and that they were “working through some things,” they announced the following month that they were going their separate ways.

“We have realised we are better as friends and look forward to remaining so,” the two said in April 2021. “We will continue to work together and support each other on our shared businesses and projects.” Lopez-who shares twins Max and Emme Muñiz, 14, with her ex-husband Marc Anthony-and Rodriguez-who has two daughters Natasha Rodriguez, 17, and Ella Rodriguez, 13, with his ex-wife Cynthia Scurtis-noted at the time they “wish the best for each other and one another’s children.”

“Out of respect for them,” they added, “the only other comment we have is to say is thank you to everyone who has sent kind words and support.”

Now, Lopez has found love once again. Shortly after her split from Rodriguez, she was spotted hanging out with Affleck. The sighting sent fans right back to the early aughts as the actor and the actress had previously been engaged in 2002 but broke up in 2004. Over the next few months, followers watched Bennifer enjoy PDA-packed date nights, go on romantic getaways, make their red carpet return as a couple and share fun family moments with their kids

And recently, Lopez and Affleck got engaged. In her newsletter On the JLo, the Hustlers star revealed the Oscar winner popped the question while she was in her “favourite place on earth”-the bubble bath.

“I was taken totally off guard and just looked in his eyes smiling and crying at the same time trying hard to get my head around the fact that after 20 years this was happening all over again, I was quite literally speechless and he said, ‘Is that a yes?'” she wrote. “I said YES of course that’s a YES.”

While Lopez said the proposal was “nothing fancy at all,” she also called it “the most romantic thing I could’ve ever imagined,” describing it as “just a quiet Saturday night at home, two people promising to always be there for each other. Two very lucky people. Who got a second chance at true love.” Affleck proposed with a green diamond ring. “Green has always been my lucky colour,” Lopez wrote, “and now for sure, it always will be.”