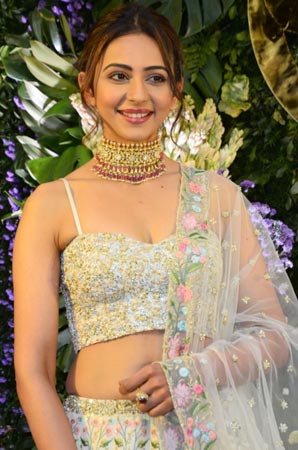 Actress Rakul Preet Singh, who is gearing up for the release of the film ‘Runway 34’, has talked about working with two big-screen legends — Amitabh Bachchan and Ajay Devgn.

She says she was not intimidated by working with the two superstars instead she was excited to share the screen with them.

Talking about if she felt intimidated to work with Amitabh and Ajay in the frame, Rakul in a conversation with IANS said: “I am not someone who gets intimidated. I feel that if in the moment what you have worked for all your life you give into intimidation then you have lost the plot.

“I am someone who gets excited. I get that happy energy that I’ll be able to shoot with them and sharing screen space with Amitji… So, the tougher it is the more kick I get. The more challenging it is the more excited I get. So, I behave like that.”

This is not the first time for Rakul to work with Ajay, who has also directed ‘Runway 34’. She has previously shared screen space with him in ‘De De Pyaar De’ and will next be seen with him in ‘Thank God’.

“I think Ajay sir from Day 1 has been very approachable as a person. Very welcoming as a co-star. I remember meeting him for the first time on ‘De De Pyaar De’… I was nervous at that point. He is Ajay Devgn.”

“His first film had come out when I was born so it was like you have grown up watching sir and admired him for what he is as a person but he is very warm and he respects a fellow actor.”

The film is reportedly inspired by the true events of the Jet Airways Doha to Kochi flight that had a narrow escape on August 2015, after facing difficulties to land at the Cochin International Airport due to bad weather and unclear visibility at 5:45 in the morning.

Was it tough shooting in a small space?

“We shot in a real cockpit. We didn’t make a set of it. We got a real simulator… The panel that you see or every button that you see is real. So whatever we were pressing was real… We got trained on it. It was tough to shoot in that confined space because Ajay Devgn (sir) had put seven cameras in that cockpit which is very small. That was a challenge for him also as a director.”

The actress talked about her character Captain Tanya. She says that even though it was a tough film and role, it was not very difficult to get out of the intensity of it.

“I am as a person in general someone who detaches as soon as I have done shooting and that I do constantly do everyday because we shoot long hours and maybe in a month at a stretch and you don’t get into the loop of the emotions of the character is feeling. So, I as an actor like to do things after pack-up that make me feel normal. The girl that Rakul is.”

She added: “I wont say difficult but I would say challenging because we are doing something that has not been seen in Indian films before. To create that tension and fear in a small cockpit. Thinking that there is turbulence and reacting that way so of course it was a lot of toll. But I think that is what gives you the kick.

The film, which also stars Amitabh Bachchan, Rakul Preet Singh, Boman Irani, Aakanksha Singh and Angira Dhar, is set to hit theatres on April 29, where it will clash with Tiger Shroff and Nawazuddin Siddiqui-starrer ‘Heropanti 2’.