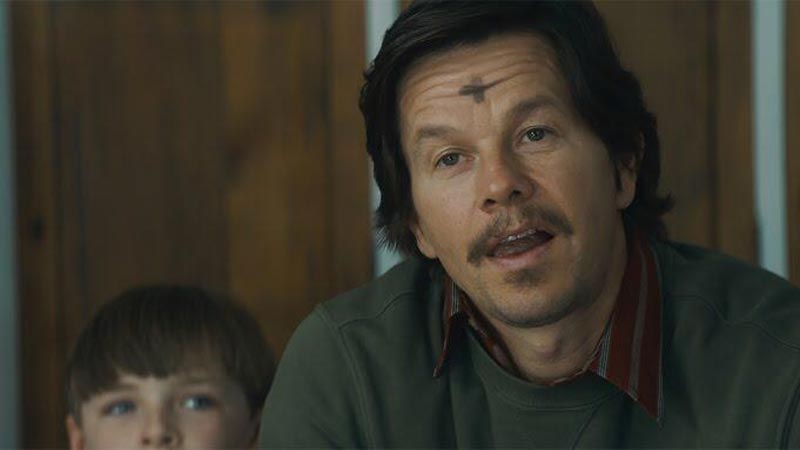 The ad campaign for “Father Stu” – before-and-after photos with Mark Wahlberg looking sleazy in a mug shot, then as a clean-cut clergyman glancing up at the heavens – makes you think it’s going to be a movie about the world’s toughest priest. It is, but not in the way you expect. “Father Stu” is based on the true story of Stuart Long, who started out as an amateur boxer, and Wahlberg plays him as an innocent ruffian in shaggy hair and a handlebar mustache who’s grinding away at being a fighter because he doesn’t know what else to do. By the time the film starts, in the ’90s, he is already over the hill: a former Montana Golden Gloves heavyweight champ who can’t find a sponsor, and who walks away from each bout with lingering infections. So he decides, on a whim, to go to L.A. to make it as an actor.

He’s as naïve about his prospects, and as sun-dazed in his misplaced belief in himself, as Joe Buck in the early scenes of “Midnight Cowboy.” Wahlberg invests Stuart with a comparable self-adoring gift of gab, and “Father Stu,” which tends to zigzag from one plot point to the next, rides along for a while on his cockeyed optimism. The writer-director, Rosalind Ross, never shows us the mechanics of how Stuart lands a job on a TV mop commercial, or of how he knows which vehicle in the parking lot belongs to his grizzled, angry, alcoholic-monster father, Bill (Mel Gibson), who abandoned Stuart and his mother, Kathleen (Jacki Weaver), long ago. Everything that happens feels a little rushed, though the movie does succeed in showcasing Stuart as an overgrown kid who has never taken responsibility for himself.

When he’s working behind a supermarket meat counter and tries and fails to land a date with the earnest, heart-shape-faced Carmen (Teresa Ruiz), then hunts her down at the church that’s the center of her existence, then commits himself to getting baptized as a Catholic, all so that he can work his way into her good graces, he still strikes us as an on-the-whim romantic – the kind of compulsive flake who will put himself through a religious conversion just to prove something. Carmen won’t sleep with a man outside of marriage, so Stuart’s conversion comes off as his elaborate way of saying, “I love you.”

Part of what makes it seem like a lark is that Stuart only pretends to stop drinking. He plays the pious suitor in front of Carmen’s conservative Latino father, but at the bar he’s still doing shots. Then one night, after having a conversation at the bar with an oddly philosophical derelict who looks a lot like Jesus (coincidence?), he gets on his motorcycle, speeding into the night, and winds up in a nearly fatal accident. The doctors are ready to give up on him, but he pulls through, with a new lease on life. When he gets together with Carmen at a diner, and she thinks he’s about to propose, he blurts out a very different proposition: He now plans to become a priest.

In the movie that movies have bred us to expect, Stuart would become that priest, and a certain drama and comedy would arise out of the kind of holy man he became: quirkier, more badass, not so by-the-good-book, one who stays true to the spirit of God by breaking the rules. But “Father Stu” is mostly about a man climbing the ladder of faith, rising above his demons in a devoutly arduous and feel-good way. And part of the patchiness of Ross’s storytelling is that it’s a conversion we have to take on faith.

Wahlberg gives a fine performance, especially when he goes to a place you weren’t expecting. Stuart (who, incidentally, is never called Stu) has to fight his way into seminary school, because his background as a dissolute pugilist doesn’t strike the church authorities as the raw material of Catholic solemnity. His showdowns with the monsignor of the local parish, played as a puckish scold by Malcolm McDowell, are some of the best in the film. Stuart may strike his fellow priests-in-training as an odd man out, but it’s hard to resist how he uses his gift for good-ol’-boy one-liners to express thoughts like “We’re not human beings with a spiritual side, we’re spiritual beings with a human side.”

Then comes the moment that tests his faith and deepens it. On the basketball court, Stuart is knocked down – and can’t get up. He is diagnosed with a rare degenerative muscle disease. This is where Wahlberg’s performance enters the shape-shifting zone of awards bait, but it’s also where his acting persona takes wing in a new way. For Stuart doesn’t just rise above his suffering; he embraces it. He undergoes a philosophical conversion, finding ecstasy on the other side of agony.

“Father Stu” is not your everyday Hollywood religious odyssey – it’s closer to “Diary of a Country Cutup.” It’s a surprisingly sincere movie about religious feeling, but it is also, too often, a dramatically undernourished one. The characters who surround Stuart are thinly drawn and pop in and out of the story. Mel Gibson has what should be a showpiece role, and God knows he rages away with gnarled conviction, but the father-son dynamics exist mostly in the abstract; it never feels like a lived-in relationship. Wahlberg, through prosthetics and 30 pounds of weight gain, winds up playing Stuart as a man of stout religious wisdom who transcends his own body. But the wisdom comes into him – and flows out of him – with a little too much facile punch. “Father Stu” often feels like a drama made for what is awkwardly called the faith-based market, with the film’s worshipful sentiments all in a line, its uplift never in doubt.