Pakistan to request China to include KCR in CPEC 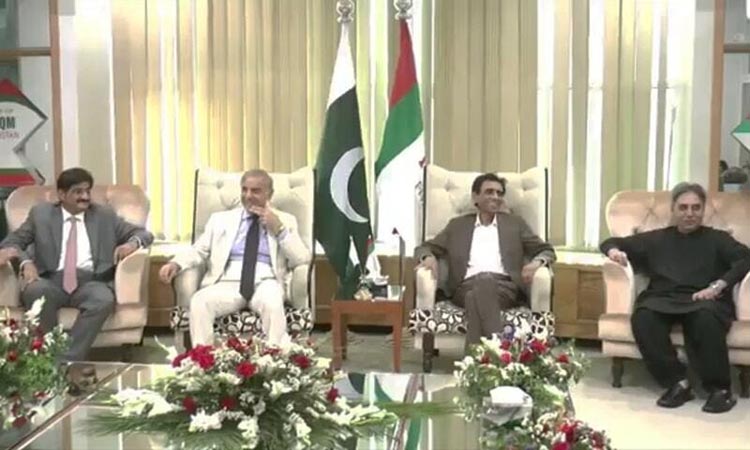 Speaking to journalists during his day-long visit to Karachi, Shehbaz said earlier Chinese authorities had shown interest in KCR; however, due to political changes, things weren’t finalised.

Shehbaz visited the CM House where he held a one-on-one meeting with CM Sindh Murad Ali Shah to discuss political, economic and several other issues of the province.

Shehbaz assured the CM Sindh of the federal government’s support for development and betterment of the province.

Terming Karachi’s drinking water issue, the “biggest challenge”, the premier said he had requested the CM Sindh and other relevant authorities to complete the programme – under which half capacity requirement will be fulfilled – by 2024 directing him to ensure that full capacity requirement is met.

He said: “We will be following the will of Allah if we are able to resolve Karachi’s drinking water issue.” Highlighting Orange Line, and Green Line projects, Shehbaz said he had asked Shah to bring air-conditioned buses to Karachi, says a news report.

“I have suggested Shah to bring thousands of air-conditioned buses in a transparent manner while pre-qualifying transporters followed by a bidding,” he said, adding that transporters will then be allowed to take loans from banks at minimal interest rates. He also acknowledged the Sindh government and the chief minister for their warm hospitality.

The PM was also presented with ajrak by the Sindh CM. The PM’s special flight landed at the PAF Faisal Air Base. He was accompanied by PML-N’s Shahid Khaqan Abbasi, Marriyum Aurangzeb, Miftah Ismail, MQM-P’s Khalid Maqbool Siddiqui, JUI-F’s Maulana Asad Mehmood and others.

Soon after his arrival, the premier along with the leaders of allied parties paid his respects at the mausoleum of Quaid-e-Azam. He also laid a floral wreath at the mausoleum and offered Fateha. The prime minister also visited the MQM-P’s Bahadurabad headquarters and met senior party officials.

The MQM-P leadership congratulated the premier on his successful election and pledged to work with the federal government to ensure welfare of the people and Sindh’s development, with a particular emphasis on Karachi.

The prime minister in turn appreciated the commitment of all allied parties to the welfare of the people. He also called for timely completion of important development projects, including the Karachi Circular Railway and K-4 water project and announced a new university for the city.