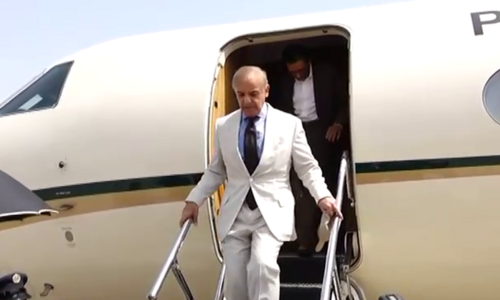 KARACHI: Prime Minister Shehbaz Sharif on Wednesday visited the mausoleum of Father of the Nation Quaid-e-Azam Muhammad Ali Jinnah, where he paid his respects and offered Fateha. This is the first visit of Shehbaz Sharif to the Mazar-e-Quaid after he took an oath of the office of the prime minister on April 11.

The prime minister laid a wreath at the mausoleum and also penned his comments in the visitors’ book. He was accompanied by PML-N leaders Shahid Khaqan Abbasi, Ahsan Iqbal and Marriyum Aurangzeb, MQM leaders Khalid Maqbool Siddiqui and Aminul Haq, and JUI-F leader Muhammad Ali Durrani.

He will also meet the MQM leadership at the party’s headquarters in the Bahadurabad area of the city. On his arrival at the port city, Sindh Chief Minister Murad Ali Shah received the prime minister and other leaders of the allied parties.

Earlier, in a tweet, PML-N spokesperson Marriyum Aurangzeb said that the prime minister also held a meeting to discuss economic issues as well as development projects for Karachi, during his flights to Karachi. She hoped that Pakistan would move forward so fast that it would be called “Pakistan Speed”.