‘The Northman’ — not weird or violent enough

* The film is directed and co-written by Robert Eggers, the maker of The Witch and The Lighthouse 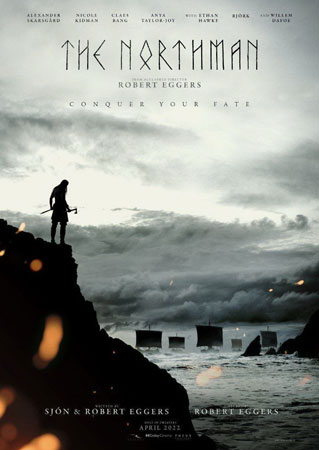 The Northman is a film in which a Viking prince proves his worthiness by farting and then levitates while his father’s innards morph into a magical fortune-telling tree.

It’s a film in which Björk plays a witch with no eyes and a wheat-sheaf headdress and a frenzied Valkyrie rides a white horse across the sky. Noses are bitten off, throats are torn out, and a man staggers into a fire, holding handfuls of his own entrails. It’s not your typical Friday night at the cinema. And yet, despite all of the strangeness and brutality mentioned above, The Northman isn’t quite strange or brutal enough.

The film is directed and co-written by Robert Eggers, the maker of The Witch and The Lighthouse. Once again, he has recreated a bygone period with a specificity and sensitivity that suggest he may well be a time traveller, and once again he has infested that period with all the weirdness and violence of its most disturbing folklore. But in The Northman, he does all that on a bigger scale, with a bigger budget and bigger stars. Ethan Hawke and a fabulously wild Nicole Kidman play a Viking king and queen who are preparing to pass the throne to their bright-eyed son Amleth in AD895. Before they can, though, the king’s resentful brother Fjölnir kills the king and carries off the queen. But, unfortunately for him, his remarkably incompetent henchmen fail to kill young Amleth, who then grows up to be a glowering hunk played by Alexander Skarsgård, and vows to get his revenge.

If the plot and the protagonist’s name sound familiar, that’s because Eggers and his Icelandic co-writer, Sjón, adapted the same tale that Shakespeare drew on for Hamlet. They even include some witty Shakespearean allusions, such as a scene in which Amleth is presented with the skull of a long-dead jester. But the most surprising and ultimately frustrating thing that Amleth shares with Hamlet is that he keeps putting off the job of dispatching his uncle.

It’s not as if he doesn’t have the opportunity. Having fled from his homeland, he is adopted by a tribe that trains him to be a bloodthirsty attack dog. The first time we see him as an adult, he marauds through a village, helping his comrades to slaughter half of the innocent inhabitants and enslave the rest. This intense, superbly choreographed massacre extinguishes any sympathy we might have for the supposed hero, given that he appears to be more of a remorseless killer than Fjölnir ever was. But it is typically bold of Eggers to show us just how barbaric Amleth’s world is – and how barbaric Amleth himself is. He isn’t a moody intellectual like Hamlet, but a killing machine who makes the Terminator look like a nursery school teacher. In short, we’re all geared up for a roaring rampage of revenge in which Amleth obliterates every obstacle in his path.

The trouble is that there aren’t really any obstacles. Disguising himself as a slave, Amleth stows away on a ship bound for Iceland, where his uncle now presides over a small farming community. Within a few minutes he is within sword’s length of his despised foe and everything is in his favour. Fjölnir commands no more than a handful of soldiers, and Amleth is taller and tougher than all of them. They are stupid enough to make the Bond-villain error of leaving a prisoner alone in a room, unguarded, with a weapon nearby. And Amleth is aided and abetted by a cunning beauty who falls in love with him for no obvious reason except that he has the kind of perfect teeth and chiselled abs that must have been difficult to achieve without the aid of modern-day dentistry and gym equipment.

If the plot and the protagonist’s name sound familiar, that’s because Eggers and his Icelandic
co-writer, Sjón, adapted the same tale that Shakespeare drew on for Hamlet. They even include some witty Shakespearean allusions, such as a scene in which Amleth is presented with the skull of a long-dead jester

Despite all these credibility-straining, tension-sapping advantages, Amleth keeps finding excuses to delay his vengeance. There are vague, mystical reasons for his hesitation (they have something to do with a prophecy by Björk), which is all very well when you’ve got Shakespeare plumbing the depths of a man’s conflicted soul. But between the trailers and the village-raid sequence, The Northman promises to be a grand, blood-soaked epic, so it is disappointing to see its protagonist sneaking around a scattering of huts on a grassy hillside, putting off the confrontation he’s been fixated on for decades. Where are the armies, the longboat voyages, the death-defying feats and the slimy krakens?

There is still gore aplenty, mind you, but nothing on the extravagant scale of that ferocious village raid. There is some wonderfully bizarre imagery, too, but nothing as trippy as that early hallucinatory sequence with the farting and the levitation. Björk, alas, gets no more than two or three minutes on screen. The initial feverish energy dissipates, the geographical scope diminishes, and the stakes lower, until The Northman has become a twee historical romance with thin characterisation, substandard visual effects, and a few US and European actors speaking English in various sort-of Scandinavian accents. Kidman and Bang, incidentally, are only nine years older than Skarsgård.

Stranded somewhere between an experimental art project and a mainstream Nordic answer to Gladiator, it’s certainly tamer than The Lighthouse. More pertinently, it’s tamer than David Lowery’s the Green Knight, which came out last year. The Northman and The Green Knight have a lot in common. Both of them are earthy yet surreal swords ‘n’ sorcery quests based on medieval stories, and both feature witches, giants, shadowy banqueting halls, and heads being lopped off left, right and centre. But The Green Knight was so radically beautiful and disorientating that The Northman seems almost conventional in comparison.

On the other hand, there aren’t many films that don’t seem conventional compared to The Green Knight. Compared to most US action adventures, The Northman is adventurous and distinctive. It feels compromised, but the great stuff outweighs the not-so-great stuff. To see or not to see? If that is the question, the answer is: see it.