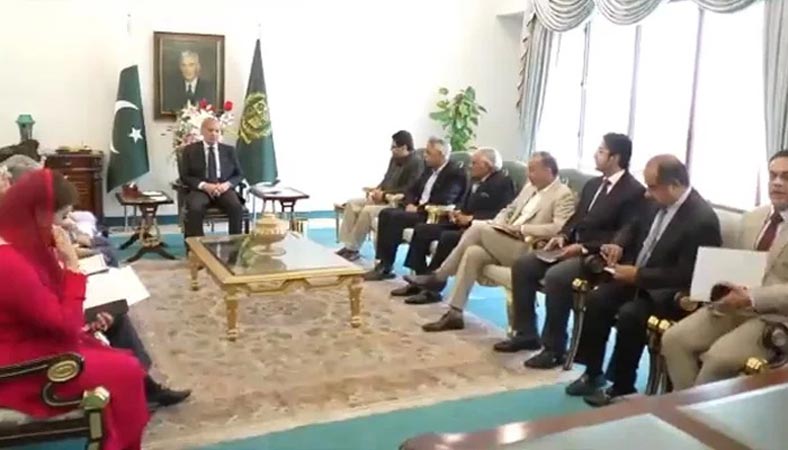 Chairing a meeting of economic experts, Prime Minister Shehbaz Sharif Tuesday issued directives for formulating financial proposals on emergency basis to address the current economic situation in the country. The PM Office, in a statement, said the directives came during the newly elected prime minister’s meeting with his economic team as he seeks to steer the country out of the financial crisis. The proposals will be devised in line with the stakeholders’ consultation in areas including agriculture, trade, investment, and banking, the statement said. A meeting will be held in the next few days to discuss the suggestions of the economic experts. The prime minister also decided to form the National Economic Council (NEC) comprising independent financial experts. In view of the challenging economic situation, he directed the setting of medium and long-term fiscal policies and also stressed the presentation of comprehensive policy options to overcome inflation. Shehbaz emphasized reduction in the prices of daily use commodities and essential items, particularly during the month of Ramazan. He also stressed the need for maintaining a balance between the national and public interests. Secretary finance gave a briefing to the prime minister on the economic situation, revenues, budget deficit, and loans besides the overall national balance sheet. Meanwhile, during an interaction with his staff, Prime Minister Muhammad Shehbaz Sharif termed diligence, honesty, and transparency his guiding principles and said serving the people of Pakistan was his top most priority. Shehbaz assumed his responsibilities at 8pm much earlier than the Ramazan working hours of 10am and said he did not want to waste time without serving the masses. The prime minister directed the officials to get into action for robust performance and ordered a single weekly off for public departments instead of the earlier two days. Also, the public offices will open at 8am from now onwards. Soon after holding the office, Shehbaz Sharif issued directives to ensure relief for the masses, including the provision of low-cost edible items at Sasta bazaars, and also stressed its strict monitoring.

Sharif said he would not tolerate any irresponsibility in ensuring the provision of inexpensive commodities to the general public.

He also ordered the officials concerned to ensure early implementation of his decisions announced in the National Assembly regarding the 10 percent increase in pensions and fixing the minimum wages at Rs25,000.

The prime minister also held important consultations with the leadership of allied parties over formation of the federal cabinet.

During his meetings with key leaders of various parties at their residences including PPP Chairman Bilawal Bhutto Zardari, Dr Khalid Maqbool Siddiqui of MQM, Fazlur Rehman, Sardar Akhtar Mengal, Dr Khalid Magsi, Shah Zain Bugti and Aslam Bhotani, he individually expressed his gratitude to these leaders and their members of the assembly for supporting him during his nomination and election to the office of the prime minister, PM Office Media Wing said in a press release.

The prime minister said that with the same confidence and passion, they would move ahead.

He said that they would implement promises and resolve issue in consultation and cooperation with the allied parties.