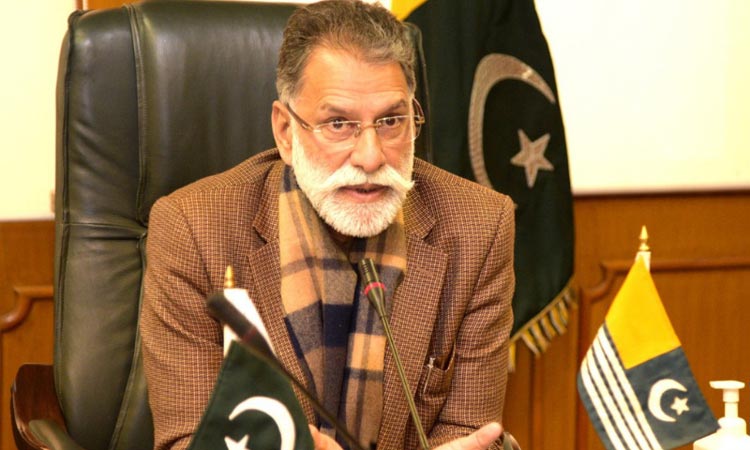 A no-confidence motion was filed against Azad Jammu and Kashmir Prime Minister Abdul Qayyum Khan Niazi on Tuesday by dissenting members of Pakistan Tehreek-e-Insaf (PTI). The motion was filed under Article 18 of the AJK’s interim Constitution bearing signatures of 25 members of the legislative assembly. According to reports, Sardar Tanveer Ilyas has been nominated as the new Leader of the House. The move comes after the former prime minister Imran Khan was ousted from the government on April 9. Niazi, 61, was elected as a member of the Legislative Assembly on July 25, 2021, elections from Poonch district. His nomination superseded several top party leaders and strong candidates for the coveted post, particularly PTI Kashmir president and former premier Barrister Sultan Mahmood Chaudhry, and billionaire Sardar Tanveer Ilyas. “A resolution to the vote of no confidence against Prime Minister Sardar Abdul Qayyum Niazi is being submitted under Article 18 of the AJK Constitution for the following reasons,” reads the hand-written document. “The prime minister has lost the confidence of the [PTI] parliamentary party for not implementing the party’s manifesto, for [resorting to] bad governance, nepotism and violation of merit, and for not highlighting the Kashmir issue,” it added. Since the AJK Constitution makes it mandatory to name the successor of the premier in a no-trust motion, the movers named PTI’s regional president and senior minister Sardar Tanveer Ilyas as their choice for the coveted office. The resolution was signed at the Islamabad residence of former federal minister Ali Amin Gandapur, following which cabinet members Abdul Majid Khan, Muhammad Akbar Ibrahim and Ali Shan Soni submitted it in the assembly secretariat in Muzaffarabad. The PTI parliamentary party comprises 32 members, including PM Niazi. As the news broke, it was assumed that the PTI lawmakers from AJK had switched loyalties from party chairman Imran Khan – hardly 36 hours day after his exit from the office of the prime minister of Pakistan – by attempting to overthrow his nominee in AJK, just eight months after his election. However, Khawaja Farooq Ahmed, minister for local government and rural development, was the first to dispel that impression, claiming that the move had Khan’s blessing. “Let it be clear to everyone that the no-confidence resolution in AJK Assembly has been submitted on the advice of and after approval from PTI Chairman Imran Khan to frustrate a move by PPP-PMLN nexus.