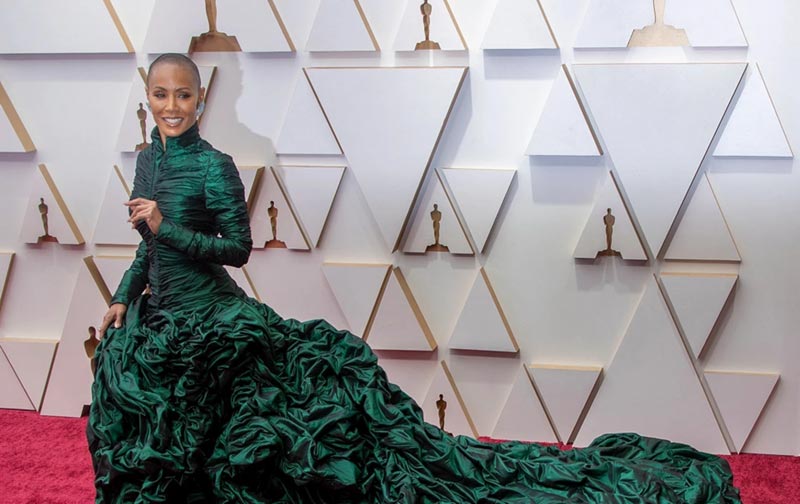 She’s moving on. Jada Pinkett Smith hit the red carpet for the grand opening of the Rhimes Performing Arts Centre in Los Angeles on April 9, marking her first public appearance since her husband Will Smith slapped Chris Rock at the 2022 Oscars last month.

With all eyes on her, the 50-year-old actress in arrived in a strapless glittering gold gown, styled with gold embellished sandals and matching drop earrings. On the red carpet, she smiled and posed for photographers alongside celebrated television producer Shonda Rhimes-famous for creating such series as Grey’s Anatomy, Scandal, and How To Get Away With Murder-and five-time Emmy-winning actress Debbie Allen.

During the Oscars’ March 27 broadcast, Pinkett Smith found herself at the centre of the night’s most talked about moment when Rock made a joke about her bald hairstyle while on stage during the ceremony. While the actress-who suffers from alopecia-rolled her eyes at the dig, her husband of nearly 25 years was furious. Smith then marched to the stage and slapped the 57-year-old comedian in the face.

The 53-year-old actor then screamed twice at Rock the comedian, “Keep my wife’s name out of your f–king mouth,” while the audience gasped in shock. Smith-who went on to win the Best Actor Award for his performance in King Richard-later attempted to justify his actions, saying in his acceptance speech. “Love will make you do crazy things.”

Two days after the jaw-dropping incident, Pinkett Smith broke her silence on Instagram, sharing a message that read, “This is a season for healing and I’m here for it.”

Amid the fallout, Smith resigned from the Academy, thereby forfeiting his ability to vote in future Oscars and apologised to Rock the Academy also issued Smith a 10-year ban from all of their events. In response to the ban, Smith shared in a statement to E! News, “I accept and respect the Academy’s decision.”