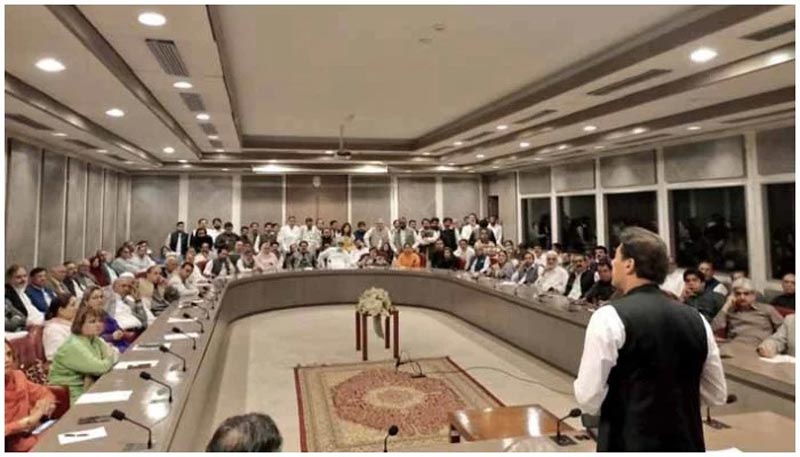 PTI Chairman Imran Khan Monday demanded immediate elections in the country after his unceremonious ouster from the prime minister’s office.

The announcement comes hours after the National Assembly elected Shehbaz Sharif as Pakistan’s 23rd prime minister, with 174 members of the lower house of parliament casting their vote in favour of the PML-N president.

But Khan, who even before his ouster claimed that his removal from office was part of a foreign conspiracy, has refused to accept Shehbaz as the prime minister. “We are demanding immediate elections as that is the only way forward – to let the people decide, through fair & free elections, whom they want as their prime minister,” the PTI chairman said.

He also announced that on Wednesday – two days from now – he will be holding a rally in Peshawar after Isha prayers – his first jalsa after being “removed through a foreign- instigated regime change”. “I want all our people to come, as Pakistan was created as an independent, sovereign state, not as a puppet state of foreign powers,” the ex-prime minister said. “There can’t be any bigger insult to this country,” Khan told reporters on Shehbaz being elected as prime minister.

Earlier in the day, the former prime minister Imran Khan tendered his resignation as a member of the National Assembly. The former ruling party, Pakistan Tehreek-e-Insaf (PTI), posted the resignation of the party’s chairman in a Twitter post. The PTI announced it was resigning from the National Assembly minutes before the scheduled election of the new prime minister, paving the way for Pakistan Muslim League-Nawaz (PML-N) President Shehbaz Sharif to secure the coveted slot. The decision was reached at a parliamentary meeting of the party chaired by Imran Khan, at the Parliament House.

“The parliamentary party has decided to resign from the assemblies against the imported government,” PTI Central Information Secretary Farrukh Habib confirmed in a Twitter post. As soon as the announcement was made, Murad Saeed resigned as MNA, making his the first resignation from the party. Soon after, PTI’s Ali Haider Zaidi also announced his resignation, saying he had submitted the same to Imran Khan. “No way we should legitimise this foreign-funded regime change in Pakistan. The battle for the sovereignty of Pakistan will now be decided on the streets by the people, not these looters,” he said in a tweet. The party’s Amin Gandapur was next to step down from his post. “I am proud to be a follower of Imran Khan and will fight till my death for the freedom of Pakistan and parliament,” he said.

A day earlier, former information minister Fawad Chaudhry had announced resigning en masse from the National Assembly in protest against the nomination of the PML-N president. He had also said that the decision to quit from the NA was the first step, saying resignations from provincial assemblies would be decided later.