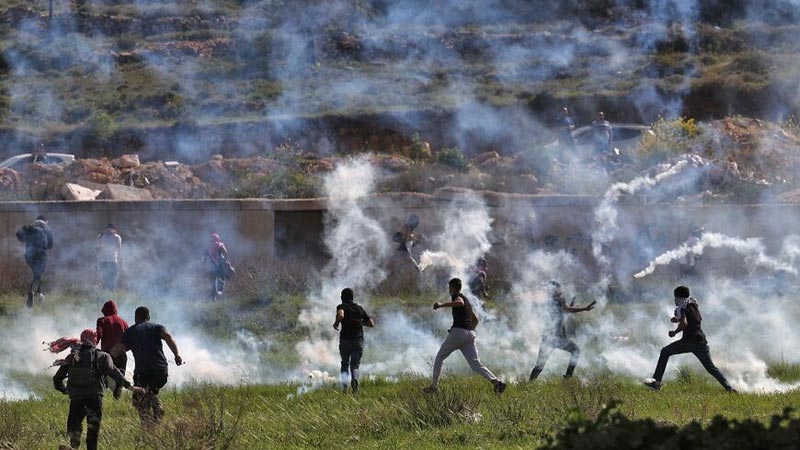 Tensions have soared since a spree of attacks in Israel left 14 people dead in the past three weeks, with Prime Minister Naftali Bennett warning the Jewish state is now “on the offensive”.

An additional 13 army battalions were now operating in the West Bank, said a military source, speaking on condition of anonymity.

In Jenin, thousands of mourners flooded the streets, many carrying Palestinian flags or rifles, for the funeral of Mohamed Zakarneh, 17, who according to the Wafa news agency died of gunshot wounds overnight.

“The resistance is in direct confrontation with the occupation and any minute we must expect a total clash,” said Ziad al-Nakhala, secretary general of the militant Islamic Jihad movement, in a statement.

“Jenin must not be isolated, no matter the cost.”

The Israeli army said it operated nearby Monday, in Burqa and Qallil in the northern West Bank, as well as in Al-Aroub and Hebron in the south.

“Violent riots were instigated by dozens of Palestinians” near Nablus, the army said, while the Palestine Red Crescent said 24 Palestinians were wounded in the Nablus area overnight.

Tensions have surged during the Muslim holy month of Ramadan, nearly a year after violence flared in the Hamas-ruled Gaza Strip, leading to 11 days of war.

A total of 14 people in Israel have been killed in four attacks since March 22, including a shooting spree in Bnei Brak, an Orthodox Jewish city in greater Tel Aviv, carried out by a Palestinian from Jenin.

Over the same period, at least 14 Palestinians have been killed, including assailants, according to a count by AFP.

Two of them were women shot dead on Sunday — one after stabbing and lightly wounding an officer in Hebron, the other when she failed to stop at a checkpoint near Bethlehem.

The military source said 30 Palestinian suspects were apprehended in the past few days, and 16 attacks against Israeli targets foiled.

Islamic Jihad has been growing in strength and capability both in Gaza and the West Bank, and especially in Jenin, according to the Israeli military source.

The source also said that Israeli forces are operating in Jenin partially because the Palestinian Authority — which has a security coordination agreement with Israel — has failed in conducting its own activities in the area.

Israeli troops were targeting relatives of Raad Hazem, the 28-year-old Jenin man who last Thursday killed three Israeli civilians and wounded 12 at a Tel Aviv bar before he was shot dead following a manhunt.

The Israeli army demanded the father hand himself in, ahead of the planned demolition of the family home. It said it had engaged in an exchange of gunfire involving the assailant’s family members on Sunday — the clash in which 17-year-old Zakarneh was killed.

Another Palestinian from the Bethlehem area was shot dead Sunday after hurling a Molotov cocktail at an Israeli vehicle, the army told AFP.

In another incident overnight, two Israelis were shot and wounded after entering Nablus, where the previous night Joseph’s tomb, a religious site, had been vandalised by Palestinians.

“A group of Israeli civilians entered into the city after breaking through an unmanned military checkpoint,” said an army statement.

Shortly after, it said, the two Israeli men emerged at another checkpoint “with gunshot wounds”.

One of the men involved told public broadcaster Kan they had gone to inspect Joseph’s tomb.

“We were done and heading back to Jerusalem but then we took a wrong turn,” and were shot at by a “terrorist”, he said.