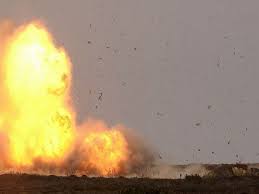 HYDERABAD: A low intensity blast ripped apart around one foot of the railway track near Railway Station Kotri in Jamshoro district on Sunday night.

According to the police, unknown terrorists carried out the explosion but luckily no train was passing through that part of the downtrack. The incident suspended the movement of trains from the track. The contingents of police and rangers reached the spot and secured the site.

A team of Bomb Disposal Squad collected evidence from the site. Similar explosions were carried out last week in Hyderabad and Kotri after which three suspects associated with a banned outfit were rounded up from Hyderabad.

No outfit has so far taken responsibility for the latest blast.