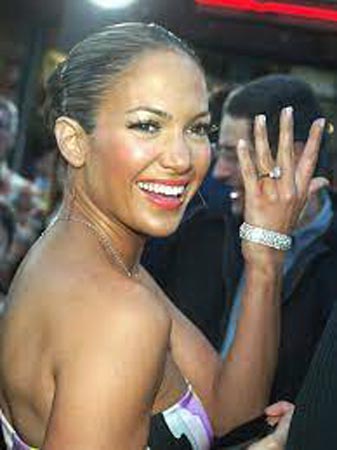 Check out all the rocks that she got. Late on April 8, Jennifer Lopez, 52, announced through her On the JLo newsletter that she is engaged to Ben Affleck, with whom she rekindled a romance a year ago.

This marks the sixth engagement for J.Lo, who previously got engaged to the now-49-year-old actor in 2002. The two broke up in 2004 and started separate families-she shares 14-year-old twins Max and Emme with ex-husband Marc Anthony, while Affleck and ex-wife Jennifer Garner have three kids-Violet, 16, Seraphina, 13, and Samuel, 10.

In 2002, Affleck proposed to Lopez with a pink diamond ring. This time, the actor gave J.Lo a green diamond sparker. In a video message sent to her fans, a tearful Lopez showed off her new sparkler, saying, “You’re perfect.”

In 2019, she said at the CFDA Fashion Awards that since she wore her iconic green Versace dress to the 2000 Grammys, “green has always been my lucky color.”

She echoed similar comments in a previous edition of her On the JLo newsletter. Per People, she wrote, “I always say the color green is my lucky color – maybe you can remember a certain green dress.”

J.Lo married the waiter-turned-restaurateur in 1997 and the two divorced less than a year later.

Ohani Noa proposed to J.Lo with what appears to be a pear-shaped diamond ring, worth an estimated six figures.

J.Lo and her former back-up dancer wed in 2001. The two split less than a year later and finalized a divorce in January 2003, while she was engaged to Ben Affleck.

Cris Judd proposed to J.Lo with this emerald-cut diamond ring, estimated to be worth six figures.

J.Lo and the actor began dating in 2002, when they the filmed famous flop Gigli. They later starred in the movie Jersey Girl and the singer’s “Jenny From the Block” music video. That November, Affleck proposed to J.Lo. The two planned on having a wedding ceremony in Santa Barbara, California, on Sept. 14, 2003. Affleck called it off four days beforehand, citing “excessive media attention.” In January 2004, the two publicly ended their engagement.

Affleck gave J.Lo a 6.1-carat pink radiant cut diamond Harry Winston ring, estimated to be worth between $1.2 and $2.5 million.

The two singers, who share twins Max and Emme, wed in 2004 and announced their split in 2011. Anthony filed for divorce a year later and it was finalized in 2014.

Anthony proposed to Lopez with an 8.5-carat blue diamond Harry Winston engagement ring, estimated to be worth $4 million.

The two began dating in February 2017.

The former New York Yankees star proposed to J.Lo on March 9, 2019 with this 15-carat emerald-cut diamond engagement ring, estimated to be worth between $1 million and $5 million.

In April 2021, J.Lo and A-Rod called off their engagement and broke up.

The two rekindled their romance in spring of 2021. On April 8, 2022, she revealed in her On the JLo newsletter that they were engaged.