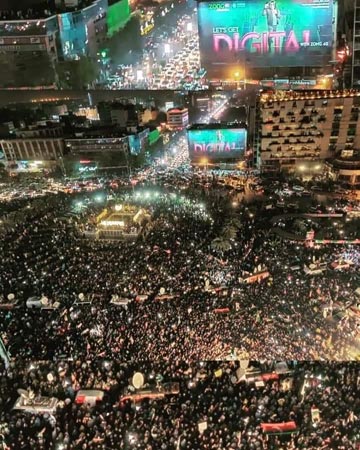 A day after success of opposition’s no-trust motion against Imran Khan in National Assembly, nation-wide protests took place with a multitude of people voicing support for the ousted premier on Sunday night. The Pakistan Tehreek-i-Insaf (PTI) took out rallies in several cities of the country to protest against the ouster of former prime minister and party chairman Imran Khan.

The protest in Islamabad started from Zero Point, with PTI supporters gathering and waving flags while chanting slogans in the former prime minister’s favour. Flow of traffic at Srinagar Highway was affected due to the rally with long traffic lines forming. Awami Muslim League chief Sheikh Rashid also addressed a rally at Rawalpindi’s Lal Haveli and lashed out at the PML-N, taking aim in particular at prime ministerial nominee Shehbaz Sharif and alleging that he was trying to avoid indictment in a money laundering reference. A large number of protesters including women and children turned up at Peshawar Press Club and expressed solidarity with the ousted prime minister. The crowd chanted slogans against Pakistan Democratic Movement chief Maulana Fazlur Rehman and the heads of other political parties along with critique that appeared to be aimed at the military.

PTI leader Hammad Azhar posted a video of a rally from his constituency of NA-126 leaving for Liberty Chowk.

PTI Senator Ejaz Chaudhry also shared a video of a rally from the city’s NA-133 constituency to Liberty Market in which slogans against the United States could be heard. Other videos shared by the PTI showed a throng of supporters and party diehards out in full force at Liberty Chowk.

A protest was held in Karachi on Rashid Minhas Road where a large number of supporters, including women and children, were in attendance. Leader of the Opposition in Sindh Assembly, Haleem Adil Sheikh was among the local PTI leadership that was present. The protestors chanted slogans against the ‘imported government’ as well as PPP Chairman Asif Ali Zardari.

Overseas supporters of the PTI also came out to support Khan, with a video shared by Ali Haider Zaidi showing protestors raising slogans of “diesel” – a reference to Khan’s fierce political rival Rehman of the JUI-F.