One dead as Israel army raids WBank after deadly attacks 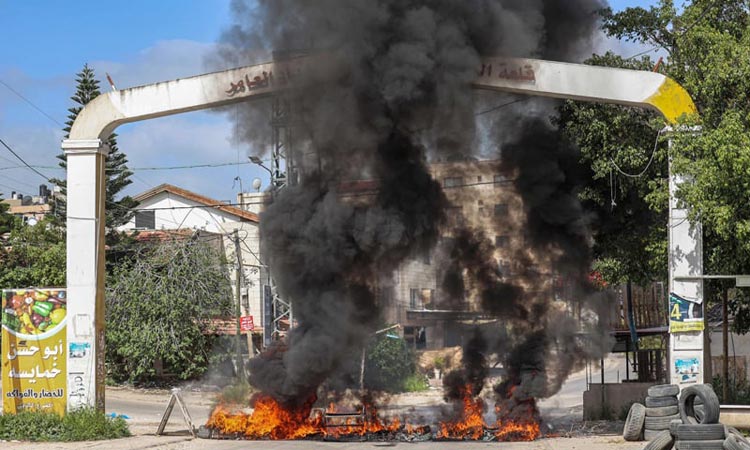 Israeli security forces raided the flashpoint West Bank district of Jenin on Saturday killing a Palestinian and wounding 12 others, after vowing there will “not be limits” to curb surging violence.

The operation, which lasted several hours, came after a gunman from Jenin went on a shooting rampage in a popular Tel Aviv nightlife area on Thursday evening, killing three Israelis and wounding more than a dozen others.

Following the attack, Israeli Prime Minister Naftali Bennett gave security agencies “full freedom” to end deadly violence that has surged since March 22 “in order to defeat terror”. “There are not and will not be limits for this war,” Bennett.

On Saturday, the army said security forces had launched the operation in the city of Jenin, in the north of the occupied West Bank, its Palestinian refugee camp and adjacent villages.

The Palestinian health ministry said that at least one Palestinian man was killed by Israeli gunfire, while the Red Crescent said 12 others were wounded.

Crowds of mourners marched through the streets carrying the body of the man — identified by Palestinian officials as 25-year-old Ahmad al-Saadi — on a stretcher covered with the flag of the Gaza Strip-based militant group Islamic Jihad. Palestinian security sources said part of Saturday’s operation was to identify the home of the Tel Aviv assailant ahead of demolishing it.

Rights activists have repeatedly denounced Israel’s policy of destroying the homes of Palestinian attackers as collective punishment, while Israel says it acts as a deterrent.

Israeli soldiers and border police forces were “conducting counterterrorism activity” in the city of Jenin and its refugee camp, when gunmen had opened fire “endangering their lives,” the army said in a statement.

In response, troops opened fire “towards the armed assailants,” the army said, adding there were no injuries among Israeli ranks. “An M16 assault rifle used by an assailant to attack the troops was confiscated,” it added.

An AFP photographer at the scene said the operation ended at midday.

The Jenin refugee camp is a stronghold of armed factions, where three other Palestinians linked to an anti-Israeli attack were killed by the army last week.

In addition to giving security forces a free rein to curb a surge in violence, Bennett on Friday ordered the closure of the Jalameh checkpoint between the Jenin area and Israel. On Friday, the father of the Tel Aviv attacker, Fathi Hazem — a retired Palestinian security forces officer according to Palestinian sources — struck a defiant tone.

Speaking to hundreds at the family home in Jenin, he said the Palestinian people were looking for “freedom and independence”. A total of 14 people have been killed in attacks in Israel since March 22, including some carried out by assailants linked to or inspired by the Islamic State group.

Over the same period, at least 10 Palestinians have been killed, including assailants. The Palestinian Islamist movement Hamas and the Islamic Jihad group praised the Tel Aviv attack — drawing criticism from the UN — but did not claim responsibility. Palestinian leader Mahmud Abbas denounced the Tel Aviv attack, while the United States stressed anew its support of key ally Israel. The Tel Aviv attack killed three Israeli men: childhood friends Tomer Morad and Eytam Magini, as well as father of three Barak Lufan. It came amid heightened tensions during Ramadan, after violence that flared during the Muslim holy month last year between Israeli forces and Palestinians led to 11 days of devastating conflict between Israel and Hamas.

Earlier this month Israeli security forces killed three Islamic Jihad militants when they came under fire during an operation to arrest them in Jenin.