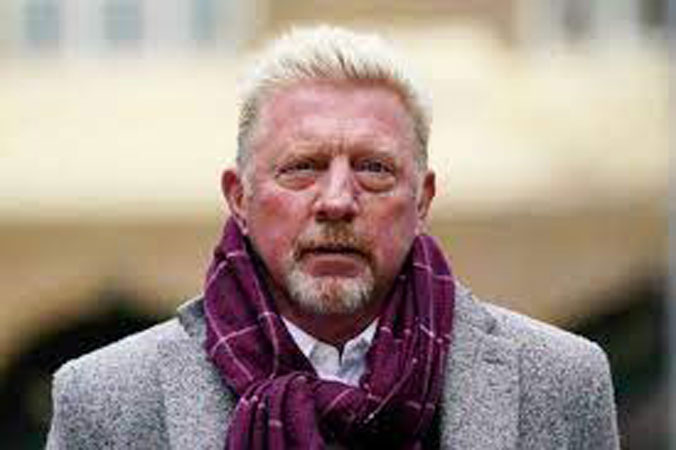 LONDON: Former Wimbledon champion Boris Becker could be jailed after being found guilty of four charges relating to his 2017 bankruptcy by a London court on Friday. The 54-year-old German was accused of hiding millions of pounds worth of assets, including two Wimbledon trophies, to avoid paying his debts. Becker, who has lived in Britain since 2012, said he had co-operated with trustees trying to secure his assets, even offering his wedding ring, and relied on the advisers who managed his life away from tennis. But a jury at Southwark Crown Court found him guilty of removal of property, two counts of failing to disclose estate and concealing debt and acquitted him on a further 20 counts.

Judge Deborah Taylor released the six-time Grand Slam singles champion on conditional bail ahead of sentencing at the same court on April 29, when he could face a jail sentence of up to seven years. Former world number one Becker, who was supported in court by his partner Lilian de Carvalho Monteiro and eldest son Noah, said he was “shocked” and “embarrassed” when declared bankrupt on June 21, 2017 over an unpaid loan of more than £3 million ($3.9 million) on his estate in Mallorca, Spain. The court was told Becker received 1.13 million euros (about £950,000) from the sale of a Mercedes car dealership he owned in Germany, which was paid into a business account used as his “piggy bank” for personal expenses.

He was found guilty of transferring hundreds of thousands of pounds to other accounts, including those of his ex-wife Barbara and estranged wife Sharlely “Lilly” Becker, the mother of his fourth child. Becker was also convicted of failing to declare a property in Germany, and hiding an 825,000 euros bank loan and shares in a tech firm.

He told jurors he did not know the whereabouts of several pieces of silverware, including his first Wimbledon trophy, when Becker became the youngest winner of the men’s singles title at the grass-court Grand Slam aged just 17 in 1985. That success, built on a powerful serve and volley game, proved the launchpad for a career that yielded two more Wimbledon titles in 1986 and 1989, two Australian Opens (1991 and 1996) and the 1989 US Open.

He also won the 1992 Olympic men’s doubles gold medal with Michael Stich during a career that yielded 49 singles titles in total. Becker told the court he earned a “vast amount” during his career, with the court hearing he won some $50 million in prize money and sponsorship deals. But Becker, who went on to coach current men’s world number one Novak Djokovic for a spell and cemented his popularity with the British public by becoming a BBC tennis pundit, said his earnings “reduced dramatically” following his retirement in 1999. He said he was involved in an “expensive divorce” from ex-wife Barbara Becker in 2001, which included high maintenance payments to their two sons.