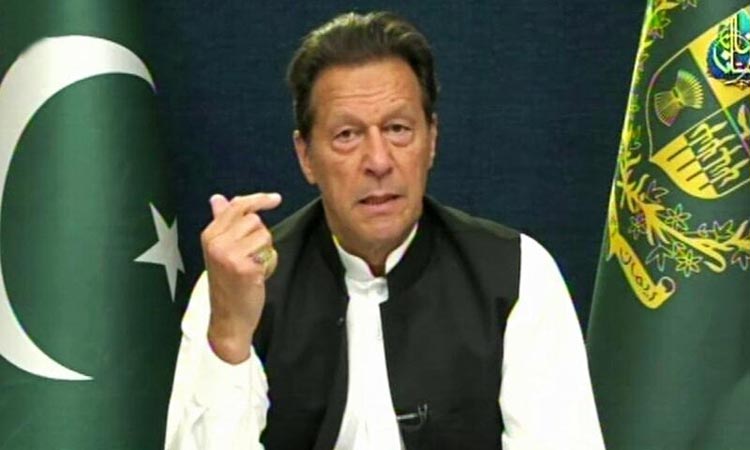 Prime Minister Imran Khan Friday expressed his firm resolve not to let an “imported government” be imposed in Pakistan to serve the interests of foreign powers.

In a televised address to the nation, Prime Minister Imran Khan, who is confronting an opposition alliance of around a dozen religio-political parties, said, “The people of Pakistan are not slaves.”

“Pakistan did not come into being to follow the diktats of foreign powers. Out Kalima La Illah Illallah and Iyaka Nabado wa Iyaka Nastaeen are our guiding principles,” he said and added that the country was created by the sacrifice of hundreds of thousands of precious lives from a united India in 1947.

Imran Khan urged the nation, particularly the youth to rise and stand with him in his struggle to protect the sovereignty of Pakistan. “Your future is at stake. If you do not take a stand to protect the sovereignty of our country, we will continue to remain subservient. The nation has to rise together to save Pakistan,” he said in an impassioned tone.

Imran Khan said he will turn to the public for support. “We are not a nation that can be used like tissue papers,” the premier said.

He said: “They [the Opposition] wants to get rid of the corruption cases registered against them.” The premier further questioned that if they [the Opposition] is so confident, why are they afraid of holding elections? He urged the nation to come out of their homes on Sunday after Isha prayers for a peaceful protest.

“All the people should come out of their houses to protest against the ‘foreign-funded drama’ and I will be there with you as I will never accept this foreign conspiracy against Pakistan,” he concluded.

The PM said that while he respected the decision of the Supreme Court regarding the restoration of the National Assembly, he is saddened by the verdict. Recalling the time when he was arrested, the premier said that he strongly believes that the judiciary is the guardian of justice in the country. The premier said that while he respected the country’s judiciary, he complained that the Supreme Court should have at least initiated the probe on the “foreign conspiracy” matter. “I respect the Supreme Court and the judiciary, but the apex court should have looked at the threat letter before issuing the verdict,” he said. PM Imran Khan further complained that the apex court did not take the matter of the “threat letter” as seriously as it should have been taken.

The premier further said that the decision on Article 63 (A), regarding horse-trading, also added to his disappointment. “The youth of Pakistan is our future and if they see leaders selling their conscience, what precedent are we setting for them?” he asked, adding that even MNAs who came on reserved seats have become sellouts.

He said that nations must stand against wrong, otherwise, nobody can protect them if they don’t raise their voices against the corruption and other evils prevalent in the country.

Speaking about the “threat letter”, the premier explained what a cipher is – a coded message sent by embassies to their country – and said that this message cannot be shared with the media and public because if these codes are unveiled, all secret information of Pakistan will be unveiled.

He said that during the meeting between the Pakistani ambassador and the US official, the latter complained that “I [Imran Khan] should not have visited [Russia].”

PM Imran Khan maintained that even before the no-confidence motion was filed against him, the US official had warned the Pakistani ambassador that if Imran Khan manages to save himself from the motion then Pakistan will have to face “severe consequences.”

The premier mentioned that the US official knew beforehand that a no-confidence motion was to be submitted against him, adding that they also knew who would come to power if the Opposition manages to oust him.

Criticising the US official for his arrogance, he said that the official told the ambassador that if Imran Khan is ousted, Pakistan will be spared no matter who takes the charge.

PM Imran Khan levelled allegations against PML-N President Shahbaz Sharif and said the had apparently prepared his sherwani for the oath-taking ceremony – as a result of being involved in this “foreign conspiracy.”

“It is so shameful for the 220 million people of Pakistan that a foreign official is ordering the sitting prime minister of the country through a third person, warning of severe consequences and alluring them of forgiveness if I [Imran Khan] leave the office,” he said.

He further added that when details related to the letter were revealed, it was disclosed that US diplomats were meeting the MNAs. “Two of my own ministers informed me that the US officials knew about the no-confidence motion against me months before it was submitted,” he said, adding that it gradually occurred to him that this was all “pre-planned and scripted.”

Taking a jibe at Shahbaz’s statement regarding “beggars are not choosers”, he said: “It is important for the nation to decide at the moment that do we want to live as – an independent state or do we want to accept slavery.” “If the West knows anybody in the country, that’s me,” he said, elaborating on the reasons why the US is against him.

“All this drama is being staged to remove one person [Imran Khan] because the West has realised that they cannot control my actions and I will not become its slave,” he maintained.

Comparing himself with the bigwigs of the Opposition, PM Imran Khan added that unlike him, these people [PML-N supremo Nawaz Sharif, PML-N President Shahbaz Sharif, and PPP Co-Chairman Asif Ali Zardari] are ready to sacrifice anything in order to save their money. “That is why they want to come back to power.”