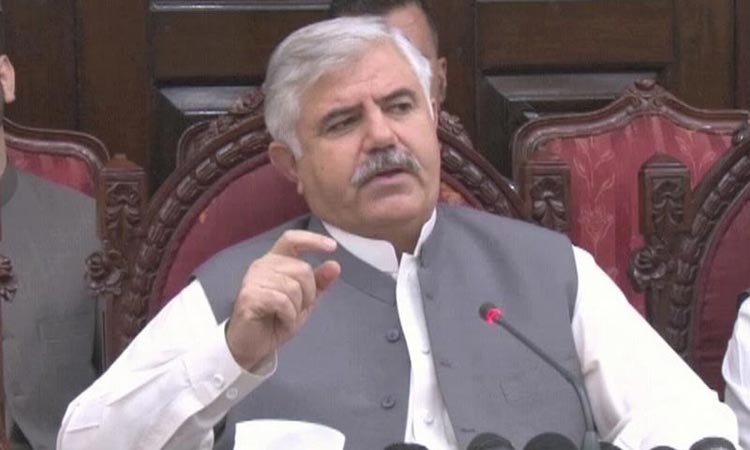 After Prime Minister Imran Khan and Punjab CM Usman Buzdar, the opposition on Friday turned its guns toward Khyber Pakhtunkhwa Chief Minister Mahmood Khan and submitted a no-confidence motion against him in the KP Assembly. A delegation of senior lawmakers submitted the no-trust motion against Khan. “We beg to move that leave may be granted under sub-rule (1) of rule 18D of the Provincial Assembly of Khyber Pakhtunkhwa Procedure and Conduct of Business Rules to move a resolution of no-confidence against the Chief Minister under Article 136 of the Constitution of the Islamic Republic of Pakistan,” the notice read. According to the resolution: “[..] Mahmood Khan has ceased to command the confidence of the majority of the Members of this Assembly as this Assembly as the Chief Minister, it is hereby resolved that the said Mr Mahmood Khan shall stand ceased to hold the said office.”

According to Awami National Party (ANP) leader Sardar Hussain Babbaik, the no-trust vote was submitted to stop the “unconstitutional measures” taken by the PTI government, adding that all parties in the opposition were taken on board before the move. MPA Khushdil Khan said that 20 per cent members of the provincial assembly supported the motion. The opposition leaders were of the opinion that the government was in “panic mode” after the “unconstitutional” steps taken by it in Punjab.

They said that the province has come to default due to the unconstitutional steps taken by the government, adding that the resources of the province were distributed on a personal basis. The motion is supported by the members of the PML-N, ANP and BAP.